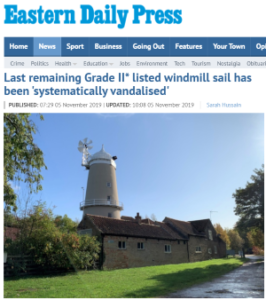 The last remaining timber sail of Grade II* (GII*) listed Denver windmill in Norfolk has been ‘systematically vandalised’, with costs to replace the four sails estimated at around £250,000, writes The Eastern Daily Press.

The owner of Denver Windmill has expressed his disappointment over the act of vandalism to the windmill’s last remaining timber sail. John Nash took over ownership of Denver Windmill two years ago and has been involved in multiple projects to renovate the Grade II* listed building. One of the major projects is to restore the four sails to get it running again as a fully functioning windmill. But this task has been made even harder by the ‘mindless’ act of vandalism to the last remaining timber sail.

Mr Nash said: ‘I’m disappointed someone would come and do that, it’s completely mindless, It’s set us back. It was a good pattern but now it’s in such a state it will never go back up again. This is the only last real sail we had that we could have replicated the pattern from.’

The 40ft by 9ft wooden sail has had its metal brackets broken off that was holding two control mechanisms in place. Mr Nash, who has lived in the village of Denver for 11 years, said: ‘You can just see the mammoth task ahead, it’s a serious expense. It has been systematically vandalised, around 40 to 50 components have been individually smashed. We found a metal rod that they’ve obviously been using to hack away at it. The control mechanism, which controls the opening and closing of the sail, has been smashed off on both sides. It’s been lying outside since I bought the mill and the other sails were taken away and destroyed to the best of my knowledge.’ Costs to replace the four sails is estimated at around £250,000.