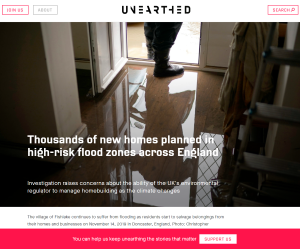 Greenpeace investigation raises concerns about the ability of the UK’s environmental regulator to manage homebuilding as the climate changes.

Thousands of homes are set to be built in high-risk flood zones across England, an Unearthed investigation has found, as communities across Yorkshire, Lincolnshire and the Midlands struggle with severe flooding. By cross-referencing housebuilding plans in 10 flood-prone local authorities with the Environment Agency’s (EA) flood risk map, Unearthed has identified proposals to build 9,688 homes in high-risk areas.

What’s the difference between high and medium flood risk?