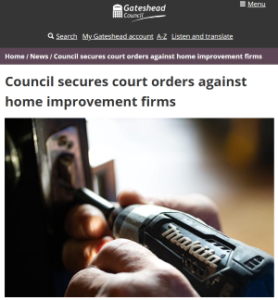 Gateshead Council has used a little-used piece of legislation to limit the behaviour of two home improvement companies which have been the subject of more than a hundred complaints from the public.

ASC Home Improvements Ltd has been the subject of numerous complaints including pressuring customers to enter into a contract by offering a ‘discount’ for a limited period of time, requiring large deposits to be made with no work ever carried out, failing to refund customers when they have asked for their money back, work left incomplete and poor standards of workmanship. Its director Adam Crake is also a director of Aspire UK Home Improvements Ltd., a company which recently has also been the subject of similar complaints from unhappy customers. Now, Gateshead Council has secured an Enforcement Order against Adam Crake and his 2 companies under The Enterprise Act 2002, a little-used piece of legislation which gives Trading Standards powers to obtain court orders against businesses that carry on illegal and unlawful business practices. The orders mean that any future offending will be regarded as contempt of court.

‘People have paid thousands and thousands of pounds to these two companies with little to show other than further demands for more money before work can begin…’ [said]Anneliese Hutchinson. Gateshead Council applied to the UK’s Competition and Markets Authority (CMA) for permission to apply for an urgent Court Order against Adam Crake, director of ASC Home Improvements Ltd and Aspire UK Home Improvements Ltd, and Sarah Callaghan who at the time was a director of ASC Home Improvements but who later resigned from that position. After being granted permission, Gateshead Council faced the four defendants in court this week and successfully obtained an Enforcement Order against Adam Crake and his 2 companies.  The fourth defendant Sarah Callaghan agreed to sign an undertaking to the court lasting 2 years.

The Order and Undertakings prohibit the defendants from breaching various pieces of legislation, such as:

If the Order or Undertakings are breached, then the defendant responsible will be in contempt of Court. ‘This is a particularly appalling case,’ says Anneliese Hutchinson, service director for Development, Transport and Public Protection. ‘We have been almost overwhelmed with complaints about these two companies and it was clear that we needed to act as quickly to halt their unlawful practices. We therefore took the unusual step of making the application without informing the defendants in a bid to speed up the process. People have paid thousands and thousands of pounds to these two companies with little to show other than further demands for more money before work can begin. I’m pleased that the courts have made these legal orders which will protect consumers and hopefully stop these two companies from trading unlawfully. The courts have clearly recognised the seriousness of their offending, but this is by no means the end of the matter. Our action this week runs parallel to our continuing criminal investigations into the two companies and their directors, and we expect to see them in court in due course.’ She added: ‘If you have any complaints about either of these two companies, please contact Gateshead Trading Standards.’