More looking ahead to #IHBCBrighton2020 and ‘OLD TOWNS : NEW FUTURES’, as number of shoppers on UK high street falls by 10% in seven years 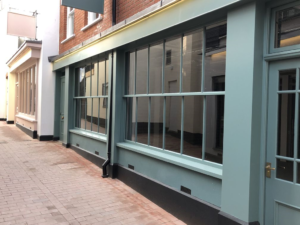 Bricks and mortar retailers suffer increase in online sales as well as rising costs and rates, in more worrying signs of the scale of the threat to the traditional economics of the High Street!

The number of shoppers heading to UK high streets, retail parks and shopping centres has fallen by 10% in the last seven years, the latest research shows.The trend was echoed in September, when retailers came under renewed pressure after heavy rainfall and Brexit worries kept consumers away, according to the British Retail Consortium (BRC) and the Springboard data company. Retail footfall dropped 1.7% last month compared with the same month last year, and 1.6% on a three-month basis. Bricks and mortar retailers have continued to struggle as consumers shift towards online shopping. The rising costs of running physical stores, including rent, wages and business rates puts additional pressure on retailers.

‘Retailers are facing a sustained drop in footfall, with numbers of visitors down over 10% in the last seven years alone. With Brexit looming, many consumers are holding off from all but essential purchases,’ said the BRC chief executive Helen Dickinson. ‘The ongoing transformation of the retail industry is putting increasing pressure on retailers, which is now compounded by the spectre of a no deal Brexit on 31 October,’ she added. ‘If the government wants to support consumers and retailers, they should make sure they take no-deal off the table, while also addressing the public policy costs such as business rates, that prevent shops from investing in their retail offering.’

A report released last month showed the number of shops, pubs and restaurants lying empty is rising at the fastest pace in nearly a decade. Debenhams and Marks & Spencer are among a number of major high street names to have announced store closure plans.The BRC-Springboard footfall data showed shopping centres suffered the most in September, with visitor numbers down 3.2% compared with the same month a year ago. But the high street also took a hit, with heavy rain in the final week of September sending footfall down 1.8%. Retail parks experienced a slight increase of 0.1%.

Diane Wehrle, Springboard’s marketing and insights director, said there may be some hope for retailers as they enter the Christmas shopping season. ‘Given the monumental changes that have occurred in our retail trading landscape over the past decade, it is unsurprising that the long-term footfall trend is a downward one,’ she said. ‘However, with 80% of spend remaining in-store there is still much for bricks and mortar stores to play for in the fourth quarter of 2019, which of course includes the all-important festive trading period.’