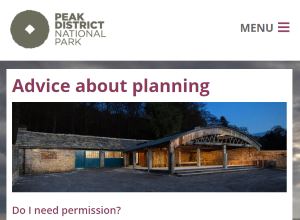 A married couple have been ordered to pay £42,000 in penalties after making unauthorised alterations to a Grade II listed building in the Peak District National Park (NP), believed to be one of the first cases of its kind in Listed Building prosecutions under the Proceeds of Crime Act (POCA).

Bob Kindred, who manages the National Database of Listed Building Prosecutions for the IHBC, and is author of the on-line database Commentary said: ‘This is the first case notified to us where the provisions of the Proceeds of Crime Act 2002 have been successfully used in a listed building prosecution.’

‘Consequently, the on-line database has been amended to include a new category covering the financial penalties under the Proceeds of Crime Act.  It will be interesting to see if more local planning authorities choose to use these powers in future for unauthorised works .’

A married couple have been ordered to pay £42,000 in penalties after making unauthorised alterations to a building dating back to the 17th century, in the Derbyshire village of Winster.

Christopher and Sarah Gillott, along with joiner Simon Mcloughlin, were sentenced at Derby Crown Court, following a prosecution by the Peak District National Park Authority.

Mr and Mrs Gillott had previously pleaded guilty, at Chesterfield Magistrates Court, to five charges relating to their former home, The Lodge – a Grade II listed building within the conservation area of Winster. Mr Mcloughlin, of Greenhill, Wirksworth, had also pleaded guilty to five charges.

Judge Jonathan Bennett heard that, between September 2007 and December 2016, a cruck truss ‘of highly significant historic and architectural interest’ was removed from the attic of The Lodge and replaced with a modern A-Frame.

Oak ceiling beams and purlins, also likely to have dated from the 17th or early 18th centuries,  were removed and replaced with ‘inappropriate, non-traditional, utilitarian’ alternatives, while floor and ceiling heights were altered.

The Peak District National Park Authority became aware of the changes in December 2016 when it received an enquiry, relating to windows and doors, from the current owner of The Lodge.

Nina Pindham, representing the Peak District National Park Authority, said Mr and Mrs Gillott had previously received permission for works and approval of a grant for roof repairs. A condition of the grant had been to ‘retain all historic timbers’.

John Wilford, representing Mr and Mrs Gillott, said the couple had planned to use the property as a B&B and tea shop but had become ‘overwhelmed’ by the works.

The court heard that the parties agreed that Mr and Mrs Gillott had benefitted by around £40,000, based on a professional valuation, as a result of works carried out at The Lodge.

That figure was split between the couple, to be paid under the Proceeds of Crime Act. With costs, the full penalty imposed on the couple was more than £50,000.

After the hearing, the Peak District National Park Authority’s director of conservation and planning, John Scott, said: ‘This prosecution shows that not only the Peak District National Park Authority, but also the Courts, regard historic building crime as very serious. It should act as a deterrent to anyone proposing to carry out unauthorised works to the detriment of the historic or architectural significance of a listed building.

‘Historic buildings and their features are irreplaceable records of our history and, once lost, are gone forever.

He added: ‘We have a statutory duty to preserve the character of listed buildings, including any features of special architectural or historic interest. This case sends out a clear message that we will not tolerate reckless alterations of historic buildings.

‘It’s important that people look after buildings and we want to help them to do that. If you are thinking of carrying out works to a listed building, please contact us – we are here to help.’