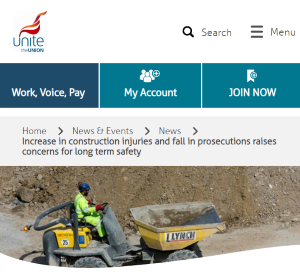 Unite, the UK’s construction union, has warned that new figures from the Health and Safety Executive (HSE) showing a rise in construction injuries and a fall in prosecutions is a ‘dangerous cocktail’ and undermines recent improvements in safety.

Drop in prosecutions
During the corresponding timeframe there was a 22 per cent decrease in the number of construction prosecutions being undertaken by the HSE which fell from 202 in 2017/18 to just 158 in 2018/19.

The rise in injuries and the sharp decrease in prosecutions has only just emerged, while the news that 30 construction workers were killed in 2018/19, a record low for the industry, was released in July.

Deeply worrying
Unite national officer Jerry Swain said: “These figures are deeply worrying. While of course we welcome that the number of deaths has decreased, this has to be tempered with the fact that construction injuries have gone up.

“The increase in injuries is likely to in part be a result of employers failing to comply with safety laws.

“Unite firmly believes that a major contributory factor to this is the sharp decline in prosecutions, which clearly indicate that the HSE’s enforcement activities are decreasing.

“This is a dangerous cocktail and it will likely to result in a greater number of workers being injured and possibly killed unless urgent action is taken to reverse this trend.

“Too many employers in construction remain prepared to ignore safety laws, to boost profits, as they believe that they won’t be caught.

“These figures show the importance of having a strong, active and interventionist HSE.

“The Conservative government’s swingeing cuts to the HSE are now resulting in workers paying for the decrease in enforcement with their health.”