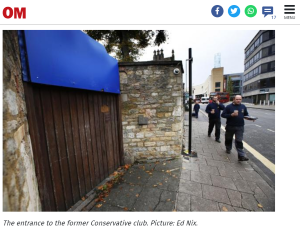 The historical value of Oxford’s medieval core has been raised as an objection to plans which could see two buildings knocked down and replaced with student flats, reports The Oxford Mail.

Planning permission was submitted in September to demolish the former Conservative club and Castle Hill House, New Road, and replace them with two accommodation buildings for the students of St Peter’s College.

The former clubhouse was closed in August 2017 and then bought by the college for redevelopment. The plans submitted by St Peter’s to Oxford City Council could see the one-storey clubhouse and two-storey building behind it, the 19th century Castle Hill House, replaced with two modern buildings, one with a height of three storeys, the other with four. These new buildings would contain 52 student ‘study rooms’, a term used for residential rooms in some developments.

But a series of objections to the plans have been raised by the Oxfordshire Archaeological and Historical Society. In its objection, the society said ‘the proposed building will block the last remaining historic view’ of the castle motte from Bulwark Lane, a small pedestrian path which runs behind the club.’ It described the new building as ‘substantial in size and massing’, and also said the new development would obscure the sudden rise in height between Bulwark Lane and New Road, which is a remnant from a medieval defensive ditch. The society, alongside local historian Mark Davies, also raised concerns about potential links between Castle Hill House and Daniel Harris, an architect who lived in the area in the early 19th century, and became the governor of Oxford castle and prison. The society admitted the links to the architect were difficult to prove.

A design and access statement written by Design Engine Architects on behalf of St Peter’s College described how the demolition of Castle Hill House and the Conservative club were part of larger planned works. In the statement, the architects quoted advice given to them by Historic England which described the existing buildings as ‘of little heritage merit.’

The statement described how the site is intended as an extension to St Peter’s College, which is on the other side of Bulwark Lane. As well as the two accommodation blocks, there are plans for courtyard areas on the site. The college also wants to knock through a wall on Bulwark Lane to create access to the new buildings from the north east. A similar new entrance would be created through the wall from Canal House, also owned by St Peter’s College, into the Castle Hill House site. The college also wants reduce the number of parking spaces in a car park on site and replace them with bicycle storage. The college is planning to build on the site so it can grow its student numbers in the future…