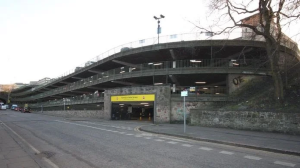 An Edinburgh car park that featured in the film T2 Trainspotting has been given listed building status, reports the BBC.

The city’s Castle Terrace car park – constructed in the 1960s – was commended for its ‘hugely innovative’ design and is recognised as Scotland’s first modern multi-storey. It was also praised for fitting in with its ‘sensitive’ setting at the western foot of Edinburgh Castle Rock. The protected status was awarded by Historic Environment Scotland (HES).

The car park features in a chase sequence in Danny Boyle’s 2017 Trainspotting film involving main characters Begbie and Renton after they emerge from a nightclub. It was designed as a Brutalist construction, characterised by a monolithic or ‘blocky’ appearance and the large-scale use of poured concrete. Elizabeth McCrone, of HES, said the Brutalist car park ‘not only had a hugely innovative design’ but was ‘carefully conceived not to interfere with views of Edinburgh Castle’.

She described it as an ‘important part of Scotland’s social history’ because it marked the rise in car ownership after World War 2, and showed how local authorities responded to the challenge of accommodating cars in our city centres. Ms McCrone added: ‘While there is a love-hate relationship with architecture built after the Second World War, these buildings have an important part to play in telling Scotland’s story. Interest in these buildings is growing rapidly and we frequently receive requests from the public asking us to look at this aspect of our heritage. Listing allows us to celebrate and recognise the variety and quality of Scotland’s diverse heritage – from all periods of time and for all types of people.’

Listed status means any plans to change a building have to be carefully considered by planning authorities. Concerns have been raised by an Edinburgh City councillor, who said structures like the concrete car park were not built to last. Councillor Joanna Mowat said post-war Brutalist structures were not as easy to repair as many older buildings. ‘Some of these buildings, if they get concrete failure it’s more difficult to repair them,’ she said. ‘The danger when you’re listing them is do you end up blighting an area because it can’t easily be repaired, restored or adapted. So it’s more of a wider concern about some of the buildings that have been listed in Edinburgh. It can be very difficult and expensive to repair and maintain them.’ She also said cars were ‘not the most desirable way’ of accessing the city centre now.