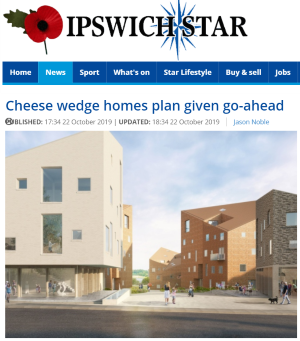 Controversial plans for 100 new homes in Melton, dubbed as the ‘cheese wedges’ by opponents, have been approved, reports The Ipswich Star.

East Suffolk Council’s planning committee met on Tuesday afternoon where the divisive proposal was considered for a third time and approved by seven votes to two. The plans, formally known as King’s View but known locally as the ‘cheese wedges’ because of the shape of the designs, propose 100 homes on the former East Suffolk Council office site with 32 of those allocated as affordable. More than 200 objections were lodged by members of the public as well as objections from Woodbridge and Melton councils, Historic England, the Woodbridge Society and National Trust.

Among the concerns were fears the design was out of character, the blocks too high, the impact on the air quality and the view from Sutton Hoo would be blighted. More than 30 demonstrators who gathered outside the meeting called for the council to launch a design competition inviting ideas that could then be put to the public. Rachel Smith-Lyte, Green councillor for Melton, said: ‘It seems a bit bonkers to me when so many existing residents who do matter think that not enough weight is given to their very real concerns.’

The original plans had previously been approved in April 2018, but were withdrawn by the developers that August. A second application was put forward which reduced the number of affordable homes from 32 to 16, attempting to use Vacant Building Credit. Those plans were refused, but an appeal on that decision remains with the Planning Inspectorate. The latest plans included minor amendments, but did reinstate the original number of affordable homes.

Woodbridge mayor Eamonn O’Nolan, who spoke against the plans, said: ‘I think it’s an absolute disgrace. I was really, really pleased that two councillors voted against it – Councillor Louise Gooch and Councillor Kay Yule, and I am their biggest fans now. But the rest of them I am really disappointed. I think with any decision like this where the report is 140 pages long, I wouldn’t be surprised if some lawyers will be looking at this very shortly and I think they have probably left themselves wide open to a judicial review.’