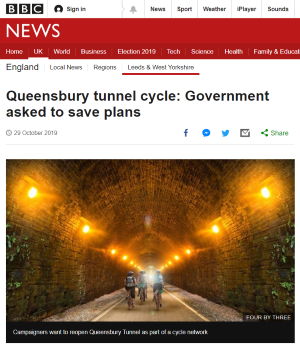 The government has been asked to intervene to stop work on an abandoned tunnel that could halt plans for Europe’s longest underground cycleway.

It was hoped Queensbury Tunnel could be used by cyclists travelling between Bradford and Halifax [but] a bid to reopen the 1.4 mile (2.3km) tunnel has been threatened by emergency work to fill in an air shaft.

The leader of Bradford Council leader has asked Grant Shapps MP to help stop work by Highways England on the tunnel.  In her letter to the secretary of state for transport, Susan Hinchliffe asks for a halt to attempts to fill and seal a shaft at the Victorian tunnel.

‘We have a once in a lifetime opportunity to save this unique asset of our Victorian industrial heritage and restore it as part of a nationally recognised cycleway that will become a national visitor attraction in its own right,’ ….  Ms Hinchliffe said: ‘The actions of Highways England, which have happened without warning, have put the whole project in jeopardy.’

The council also believes the Department for Transport could have breached planning rules.

Last week, Highways England’s contractor moved on to the site and began filling in one of its air shafts [saying] the work meant ‘any reopening is now going to be more challenging’.

The current planning application to fill and seal the tunnel had received more than 4,000 objections, Bradford Council said.

The Department for Transport has been asked for a comment.