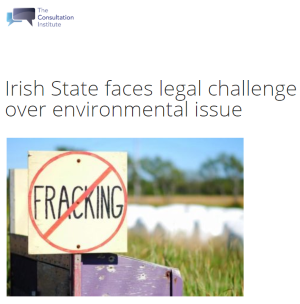 Shannon development designed to process gas extracted through fracking has been challenged by Friends of the Irish Environment (FIE) and the case has been referred by the High Court to the European Court of Justice.

The State has been warned it cannot approve the proposed liquefied natural gas facility in the Shannon estuary as a ‘project of common interest’ without a strategic environmental assessment and public consultation. The warning was issued by Friends of the Irish Environment (FIE), whose legal challenge to the extension of time for construction of the Shannon plant has been referred by the High Court to the European Court of Justice for advice.

Environmental permits: The Government currently plans to support placing the Shannon facility on the list of PCIs, which will ensure it receives highest priority in terms of State support. An EU meeting next month will finalise the list. PCIs are considered to be projects with ‘imperative reasons of overriding public interest’, allowing them accelerated planning and environmental permits.

In a letter to Minister for Climate Action Richard Bruton, Friends of the Irish Environment said it is ‘extremely concerned’ that the project will involve importation of fracked gas, ‘has the potential to lock in hydrocarbon infrastructure without any strategic assessment at a national level’ and will harm protected habitats. According to FIE, the proposed terminal and Ireland’s access to the global liquefied natural gas market were not mentioned in the key climate plans. Nor was it ‘screened’ to determine if a strategic environmental assessment was necessary.

FIE said it was ‘unable to find any substantive information such as a draft plan; an environmental report, a screening report, Natura impact assessment or any notices in relation to the approval procedure’.

FIE director Tony Lowes said ‘the distance between the Minister’s words and his deeds grows exponentially as the climate crisis deepens’. More than 44 TDs have signed a Dáil motion calling for the Government to drop its support for gas terminals that would import fracked gas from the United States. People Before Profit TD Bríd Smith said cross-party support demonstrated serious concern with Government policy on climate. ‘Continuing support for fracked gas imports into Ireland and Europe is criminally irresponsible and shows utter disregard for the climate movement and the school children’s strikes.’