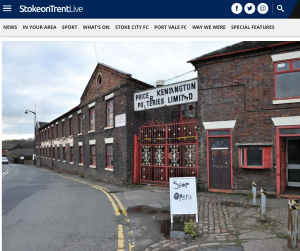 Work is to start on demolishing part of a Grade-II* (GII*) listed Stoke-on-Trent potbank at risk of collapse, The Stoke Sentinel warns motorists.

It comes after a notice was today served on the owner under Section 78 of the 1984 Building Act to give the authority the power to take immediate action when there is a danger to the public.

Now motorists are being warned of delays as a controlled demolition to bring the dangerous part of the building on the street front down to a safe height takes place over the weekend….

It will see Newcastle Street temporarily closed from the canal bridge to the Trubshaw Cross roundabout, where Wayne Walker is located.

A diversion will be in place for motorists….

Councillor Daniel Jellyman, cabinet member for regeneration, infrastructure, and heritage, said: ‘The city council is responsible for the road which runs adjacent to the building and is acting to protect the highway should the building or part of it collapse.

‘We are committed to protecting our city’s heritage and it is with deep regret that this privately-owned building has fallen into such poor condition.

… ‘We’ve been actively pursuing the owner for some time to complete works on the site to improve the fabric of the building, which culminated in a court prosecution last week.

‘Some remedial work to the building was carried out by the owner in the summer but this has not resolved the issues and we have now run out of time.

‘Recent site inspections carried out by the council have shown that a part of the building is in an unsafe and dangerous condition, leaving the city council with no option but to take steps to ensure that the public are not exposed to harm.

‘The work will involve targeted demolition of the unsafe building on the street front to bring it down to a safe height.

‘We appreciate this will cause some disruption, but the works are absolutely necessary and will be carried out as quickly and safely as possible given the obvious need to handle the demolition sensitively and appropriately.  We are left with no choice but to act to protect public safety.’

The council first served a notice on the owner, Middlesex-based Charles Lewis and Co, in July 2018 ordering the company to take steps to improve the condition of the property which is on Historic England’s heritage at risk register.

The owner was then prosecuted earlier this month for failing to comply with the requirements set out in the notice and fined £1,000….

It is hoped the site will eventually be developed.

Mr Jellyman added: ‘I’ve personally had meetings with Historic England to try and find a developer to regenerate the site but unfortunately no-one has come forward over the last four years.

‘We will be seeking to recover all reasonable costs associated with the demolition work from the site owner.’

The potbank was built in the late 18th century and has fallen victim to arsonists and thieves in recent years.

Historic England says the site is ‘highly vulnerable’ if it continues to deteriorate.

Its listing on the at-risk register states: ‘This site has been subject to fires and heritage crime and is in a poor condition. It is highly vulnerable and continues to deteriorate.

‘There has been a structural collapse to the road frontage which has been temporarily addressed.

‘Historic England has offered technical support and advice to Stoke-on-Trent City Council. Urgent works are required to stabilise the buildings while a long-term solution is found for the site.’