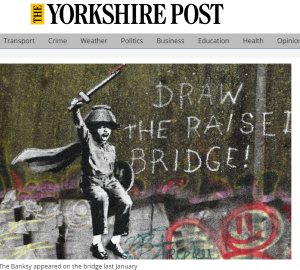 Graffiti by Banksy has been taken off a bridge in Hull as the Grade II (GII) listed Scott Street bridge – which made headlines around the globe after the artwork called Draw The Raised Bridge! appeared in January – itself faces dismantling.

Hull Council said the Banksy had been taken down in three sections on Tuesday and is now in secure storage. The council insists that the 117-year-old structure, which has been closed to vehicles for 24 years, poses a hazard to shipping and must be dismantled.

Options include displaying it on a steel structure on Scott Street in front of where it used to be or relocating to a position on the river bank close to Scott Street. Deputy council leader Daren Hale said: ‘We are absolutely delighted that we have managed to save Hull’s very own Banksy and we look forward to having it back for public viewing as soon as practically possible. Our aim is to ensure the Banksy remains part of the thriving street art culture in this area and that the context of the artwork and the history of the bridge are fully respected and acknowledged in the final scheme. This was a complex operation. The local authority has kept Scott Street Bridge in place for as long as practically possible, but we have been advised that dismantling the bridge is the only way to keep river traffic safe.’