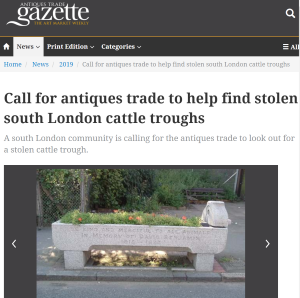 A south London community is calling for the antiques trade to look out for a stolen cattle trough, writes the Antique Trade Gazette.

The granite sculpture was taken from Green Lane in Penge, south-east London, on September 18. It had originally been installed on Green Lane in 1917 (according to the Metropolitan Drinking Fountain & Cattle Trough Association) and is inscribed with the words ‘Be kind and merciful to all animals. In memory of David Benjamin, 1815-1893’. In recent years it had become a flowerbed tended by locals.

Claire Frost has appealed to the trade for help to locate it. She is one of the moderators of the Penge Tourist Board group, an ironically named website and Facebook group with more than 9000 members.  She said: ‘Penge is a London suburb which, although it is not considered beautiful, has some fine historical buildings and is locally known for its community spirit. To lose any of our history is very upsetting for us…’

The theft has been reported to the police, Bromley Council, English Heritage, The Society for the Protection of Ancient Buildings, The Royal Horticultural Society, The National Trust and The Art Loss Register, and various media have been alerted. Frost, who works at antique jeweller Moira Fine Jewellery in Burlington Arcade, said a cattle trough in Sydenham, near Penge, has also been stolen…

The Sydenham trough, on the corner of Bell Green and Mall Walk, was installed in 1899 and inscribed ‘Metropolitan Drinking Fountain and Cattle Trough Association’. (MDFCTA) The MDFCTA is still in existence and spokesman Alan Underwood said: ‘The only positive is that the inscriptions on both troughs are unique, which should make it possible to identify them if they are ever found.’

Following these thefts it was also reported that a third trough had recently been stolen from a site in Kemnal Road, Chiselhurst. Anyone with information should call the police on 101 quoting Bromley police crime reference number 3320094/19.