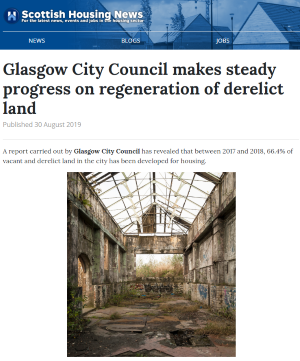 The data provided by the Scottish Vacant and Derelict Land Survey (SVDLS) revealed that the equivalent of 90 full-sized football pitches have been brought back to use within one year in the latest 2018 figures.  The study found that between 2017 and 2018, Glasgow saw a 64-hectare reduction in vacant and derelict lands, this is a 6.4% decrease from 1069 to 1005 hectares. There was also a reduction in the number of vacant and derelict sites, from 761 to 721. The reduction between 2016 and 2017 was 3.9% or 42 hectares.  A proportion of the land has also been regenerated for uses including transport, recreation and leisure.

Glasgow has consistently had the highest concentration of vacant and derelict land of any Scottish city, and it is recognised that this has arisen as a result of fragmented ownership, poor ground conditions, and inadequate infrastructure on many sites. Together these factors combine to act as a brake on the economic potential of Glasgow, and very often these sites are found in the areas affected most by deprivation…

… The council’s focus in tackling this issue will include remediating former brownfield/industrial sites, assist the delivery of sites and infrastructure to support job creation, and put greenspace on sites where there is no potential for development in the short to medium term.