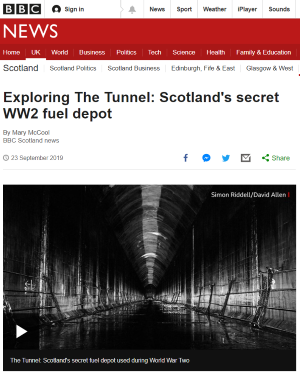 BBC News has reported on how, beneath the hills of the Scottish Highlands, lies one of the largest underground structures ever built by man, for use during World War Two as a storage depot for fuel.

Across Easter Ross it is known simply as The Tunnel.  Built between 1938 and 1941 for use during World War Two, the Inchindown oil storage facility is comprised of six monstrous tanks – 778ft (237m) long, 30ft (9m) wide and 44ft (13m) high.  The now-empty tanks are accessible by two tunnels – providing you can stomach the stench of oil vapour while navigating your way through complete darkness.

Photographers Simon Riddell and David Allen were thrilled at the prospect.  The two friends decided to explore The Tunnel as part of a project which would both stretch their physical limits and capture a piece of Scotland’s often-forgotten history.  The challenge: To take a single useable shot of tank one without digital technology, process and print the film negative on location – all while recording the experience for a documentary.  It not only meant they had to slide through a narrow pipe to get access to the tank – they also had to spend one eerie night camped underground….

… the structure of The Tunnel posed further problems for the two photographers.  The tanks, capable of holding 32 million gallons of fuel, were reported at full capacity during the Falklands – but are now empty. However, there are still signs warning any visitors to avoid all sources of ignition near the tanks in case of potential explosions.  Excavated below private land at Inchindown hill, the facility also had to be partly rebuilt following a number of rock falls. The terrain combined with oil residue resulted in some precarious navigation over slippery surfaces.

It was named among the acoustic wonders of the world by Smithsonian Magazine as it holds the record for the longest reverberation in any man-made structure – a factor that made communication incredibly difficult….

After serving its purpose The Tunnel was sold off in 1982. Plans to upgrade the depot for use by Nato were later abandoned and the site was closed by 2002…

The film will be screened in Inverness in November.