Thinking ahead to #IHBCBrighton2020 with IHBC ‘s IMHO signpost: ‘We can revive Britain’s high streets. But developers stand in the way’ 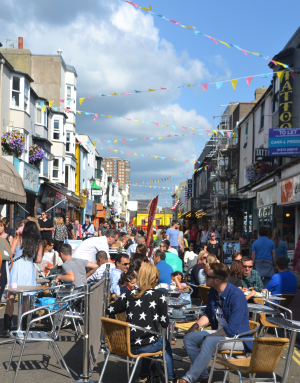 An opinion piece in the Guardian by Tony Naylor argues that ‘We can revive Britain’s high streets. But developers stand in the way’ as ‘imaginative projects are increasing footfall  [but] without radical intervention, they can only do so much’.

Anyone who has walked down a British high street recently will not be surprised by the latest news on their dire state. A report by the Local Data Company and Pricewaterhouse-Coopers reveals that chain-store closures are at their highest level since their audit began in 2010. On Britain’s top 500 high streets, 1,234 shops shut in the first half of 2019.

This is the new reality. Former anchor tenants have either sunk (BHS, Toys R Us) or, like M&S, Debenhams and House of Fraser, are shutting stores to stay afloat. At Topshop, New Look and Monsoon, a company voluntary arrangement (financial first aid for ailing brands) is this season’s must-have accessory.

Austerity, business-rate hikes and high rents have compounded the problem but, fundamentally, the rise of online shopping means we are deserting physical shops in a way that, ideally, would demand a complete rethink of the retail core around which towns orbit. Certainly, attempts to save the high street as it is currently constituted seem doomed.

‘The reality is we may need fewer high streets in the future,’ says a PwC spokesperson. ‘This opens opportunities to repurpose high street space, while [evolving] to meet consumer demand.’ But what will that look like?…

… councils and property developers increasingly want to use food and drink to seed regeneration, many inspired by Altrincham’s Market House. In 2010, 30% of Altrincham’s shops lay empty. In 2014, the Market House opened – a communal dining hall of independent kitchens attached to a speciality market – and, since then, a remarkable ecology of bars, restaurants and coffee shops has evolved around it. Footfall has risen sharply, shop vacancy rates have fallen to 9.7% and brands such as JD Sports and Nando’s have moved into the town’s once-failing shopping area.

Market House’s operator, Nick Johnson, a former board member at property company Urban Splash, claims for the £635,000 it cost (£435,000 came from Trafford council, Johnson contributed the rest) : ‘It has probably delivered the greatest regeneration outputs of any project in 25 years.’ Little wonder councils love the idea: it allows them to cost-effectively reinvent one of the few central sites they still own, the market…

But will any of this happen? The short answer is no. Councils do not have the money or the compulsory-purchase powers to radically intervene. Enlightened developers are rare….

Even if the retail property market crashes (in January, the Royal Institution of Chartered Surveyors warned unusually of ‘potential for significant changes in value’), such owners will consolidate, sell property, bulldoze it and redevelop, and if shopping centres can limp on, they will. Under new permitted development rights, closed high street retail units can now easily be turned into residential property.

Where will those new residents congregate? High streets may yet be reborn as the genuine heart of their communities, protected from commercial pressure, but don’t bet on it – and certainly not online.