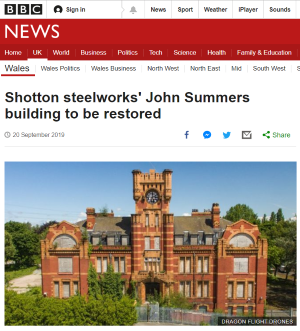 A landmark on a list of the UK’s most endangered buildings is to be brought back to life in Flintshire.

Shotton steelworks’ Grade II-listed general office and clock tower has been repeatedly vandalised since it was boarded up about 10 years ago. The John Summers building was built in 1907 when the Deeside site was expanded and it once employed 10,000 people. It is now set to be handed over to a foundation which will spend about £5.2m turning into a community hub.

Construction firm Pochin, which bought the building three years after it closed in 2006, is on the verge of signing it over to local enterprise group Enbarr Foundation. Vicki Roskams, from Enbarr, said the building was in a bad way. ‘I don’t know if people came in originally and wanted mementos but it’s had all its lead taken off the roof,’ she said. It’s been stripped out completely. We are starting with a blank canvas in essence….’

She said the work would be done by the community, for the community with the help of local firms. Pledges of time and materials have reached £1.5m and there has been a grant from the historic environment service Cadw to remove asbestos. ‘We’ve got to do this so delicately,’ Ms Roskams added…

The project will also involve restoring a number of other buildings next to the John Summers office site, including a garden area.  The steelworks remains open but on a much smaller scale than in its hey-day.