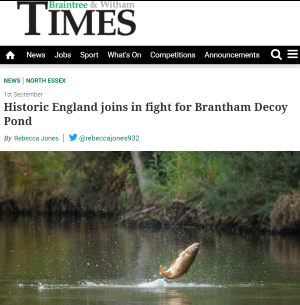 Campaigners’ money to protect an ancient lake from a housing development has been refunded after Historic England decided to take the fight into its own hands, as reported by the Braintree and Witham Times.

Residents raised more than £2,000 towards fast-tracking an application to get Brantham Decoy Pond listed as a protected monument in the National Heritage list for England. David Fisk, a resident, launched the campaign last month after concerns were raised run-off water from a nearby 288-home estate could contaminate the five-acre lake and cause ‘considerable harm’.

But after the £2,000 target was raised through donations on his JustGiving page to cover the cost of fast tracking the application, Historic England decided to step in and cover the costs. Mr Fisk said he was informed Historic England has decided to lodge the application and deal with it within the fast-track period of 12 weeks, instead of the normal five months. He said: ‘The decision was made because of the nature of the site and because it is under threat.’

There will be no charge for Historic England’s application and a result it should be made within three weeks, he said. Mr Fisk added: ‘I hope all find this result satisfactory, some may think I wasted my time raising this money but I do not as it has significantly raised the profile of the decoy pond. More than 2,000 people viewed the application on the JustGiving site and many more have seen the posts on Facebook. My thanks to each and all for the support you gave me in this matter. I can only express my delight and surprise at the extent of the public support given to me.’

… The detailed plans for the housing development were given the go-ahead in June. It is not yet clear when the building work will begin on the site now approval has been given.