IHBC signpost to BRE (and IHBC!) in Wales: Update on ‘Delivering… decarbonization…’, from Swansea, city of IHBC’s 2022 ‘Technical’ School and #IHBCSwansea2022 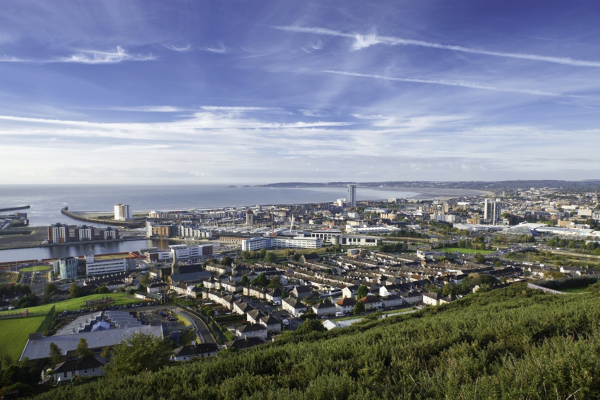 BRE has reported on the latest roundtable discussion on the programme ‘Delivering on the decarbonisation agenda in the built environment in Wales — Frameworks to build a better Britain’, which was hosted in Swansea, planned venue for the IHBC’s 2022 Wales Branch-hosted Annual School.

The latest BRE roundtable discussion took us to Swansea. Things are tough in South Wales at the moment: the future of the steel industry at Port Talbot is precarious and on the day of the discussion it was announced that Ford plans to close its Bridgend works with the loss of 1700 jobs by September 2020. Electrification of the main railway line from London was supposed to reach well into Wales but has stalled on the East side of the Bristol Channel. The planned upgrade of the M4 around Newport has also been scrapped.

Office of National Statistics figures from 2018 show how far Wales has fallen behind the rest of the UK in the productivity stakes – the Gross Value Added figures for Wales are 17% below the UK average. These statistics also show the gulf in productivity between Wales and the best performing parts of the UK, with productivity in London 50 percentage points higher than in Wales. The fiscal deficit in Wales – the gap between the money it brings in through taxes and transfers from Westminster – is marked.

The fifth in our Frameworks to build a better Britain series of articles and podcasts: roundtables and interviews with planners, architects, policy-makers, and construction experts. Explore the previous roundtable events in this series. Communities in West Wales – and Swansea felt to some allied to the West rather than to Cardiff – are amongst the poorest in the whole of the European Union. But in challenge there lies opportunity and the members of our roundtable felt that Wales has the wherewithal – both the expertise and the will – to create a better future. And a future in which carbon plays a smaller part.

In this roundtable perhaps more than any of the previous five there was a palpable sense of frustration. A sense of frustration that the answers to many of the problems of our built environment were now pretty well known and that the time for deliberation was over. It was time for action. The knowhow is unquestionably there and if those with individual expertise are allowed to get on with it then much progress could be made. For example, Wales is well on the way to the goal of achieving 70% of its energy from renewables.

Wales is also the first legislature in the world to enshrine in law a duty which falls on public bodies to safeguard the well-being of future generations. Thus it has a Commissioner for the ‘As Yet Unborn,’ Sophie Howe….

The session was opened by the new CEO of BRE Group, Gillian Charlesworth. ‘I’m familiar with the built environment having spent the last 15 years at RICS [the Royal Institution of Chartered Surveyors],’ she said.  ‘I’m fully aware that the issues we will discuss today can only be dealt with through people, expertise, collaboration and strong ideas. Many challenges especially around carbon can appear intractable. But this industry must build its influence to bring about necessary change. It is surely possible for the talent within the industry to influence from the ground up. It’s through this sort of event we can achieve this.’

…Finally, what’s good for Future Generations will always be open to interpretation. Ryan Stuckey, a practising architect in the South Wales valleys and Programme Director in Architectural Technology at the School of Architecture in Swansea made the whole panel smile when he said: ‘I’ve sat in three planning appeals for housing developments in the last six months. At all of these both sides of the argument used the Future Generations Act in their defence.’ That surely will change with time as what exactly ‘Doing The Right Thing’ is becomes more and more apparent when it comes to the UK’s built environment.

To keep in touch with developments in the IHBC’s 2022 Wales Branch-hosted Annual School follow #IHBCSwansea2022 (under development).