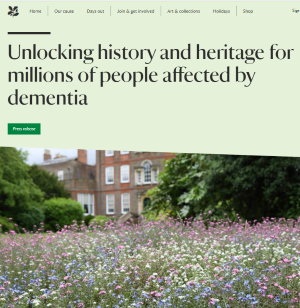 Two of the UK’s most popular charities the National Trust and the Alzheimer’s Society have today announced an ambitious three-year project to unlock some of the nation’s best loved history and heritage for millions of people affected by dementia.

The National Trust is joining forces with Alzheimer’s Society to make all of its 500 historic and countryside sites dementia-friendly, in the first project of its kind for the Trust. It comes as figures reveal that seven per cent (about 150,000) of National Trust supporters over the age of 65, including its volunteers, staff and members, may be living with the condition. This is in line with research from Alzheimer’s Society showing that 1 in every 14 people in the UK aged 65 and over has dementia, with someone developing the condition every three minutes, and the Society predicting those living with the disease will hit one million within three years.

For people with dementia and their carers, historic spaces, collections and stories can prompt and stimulate discussion and connection, encourage outdoor exploration, and offer a vital connection to the world around them, with day trips recognised as one of the most likely and regular activities for people living with the condition and their carers.  In comparison to other visitor attractions, people living with dementia also view heritage sites as ‘safe’ and familiar spaces. Heritage (including visiting sites and participating in outdoors projects) has also been found to be one of the top activities of choice for those impacted by dementia, in surveys and focus groups carried out by Alzheimer’s Society.

Launched at the culmination of World Alzheimer’s Month, this latest project will give the Trust’s 9,000 staff and 65,000 volunteers the opportunity to join Alzheimer Society’s three million Dementia Friends, and learn more about how the Trust’s sites can be more welcoming to those affected by dementia. Alzheimer’s Society is also publishing a new guide to help tourism businesses make themselves more dementia-friendly.

The new partnership, which will see one of Alzheimer’s Society’s biggest ever roll-out of its Dementia Friends’ programme within a heritage organisation, will focus on:

It will also see improvements at some properties, from improved signage, facilities and modifications to materials used on paths and car parks, to developing dementia services (such as cafes, tours and social events), taking heritage to local care homes, hospitals, day centres and community groups, and leading the drive for more dementia-friendly communities by hosting awareness raising activities and making improvements for those living with the disease.

The National Trust’s Volunteering and Inclusion Director Tiger de Souza said: ‘Dementia is the greatest health concern of our time, so it is important that people living with the condition can continue to enjoy a positive and fulfilling life.  We also know that our natural and historic places can play a significant role in improving the wellbeing of people living with dementia by helping to stimulate discussion and memories.  A number of our sites are already offering great experiences for people living with dementia, and through this landmark partnership we aim to extend those benefits to many more people. However, we recognise there are challenges around both accessibility and the support available at these sites and this is why we are joining forces with Alzheimer’s Society.’

Supporting those with dementia is part of a wider National Trust commitment to ensure as many people as possible feel welcomed at its places.  Among the work already underway to support those with dementia is the creation of reminiscence experience sessions at the Backs to Backs in Birmingham which offer monthly tours of the historic houses to recreate what life was like for families in gone-by years. At Wimpole in Cambridge, the Trust hosts it Farming Memories group, which encourages former farmers and agricultural workers with dementia to meet up and take part in farming activities.

Jeremy Hughes, Alzheimer’s Society’s Chief Executive, said: ‘Alzheimer’s Society is delighted to be uniting with one of the UK’s biggest heritage organisations to help ensure people with dementia are better included in society.  It’s great to have the National Trust encouraging people with dementia to feel confident in getting out and about in their local community. Visiting a heritage site can improve physical and mental health by helping people keep active.  The importance of such venues increases as we get older, as a place to relax, recover and engage through multi-sensory stimulation of the space around us. We hear through Side by Side, our scheme linking people with dementia to volunteers supporting them to do the things they love, that visiting a heritage site is one of the most popular activities for people affected by dementia.’