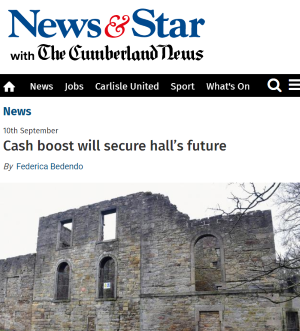 A six figure cash injection will secure the future of an iconic Workington building, Workington Hall, according to the News and Star.

The News and Star writes:

A grant of £200,000 has been announced for Workington Hall to carry out vital repair work.  The cash will come from a £150,000 grant from Historic England, while Allerdale council has allocated £50,000 to the project.  The hall is a Scheduled Ancient Monument and Grade One listed building. It is currently on English Heritage’s ‘at risk’ register, but Allerdale council is carrying out the work so that it could be taken off the register in the future.

The 106 hectares of landscaped park encircling Workington Hall is classed as a Grade Two listed historic monument.  Ward councillor Paul Scott said: ‘It’s a fantastic old building and we need to do whatever we can to regenerate it and get it back into use.  This money won’t go a long way, there’s a lot more we need to do, but it’s something we want to get done.’

He added this cash was a step in the right direction and that he would like to see the hall become a museum or be turned into a wedding venue.  He said: ‘The hall has tight links with the Helena Thompson museum, who hold the keys. I’m pretty sure it would make a lovely wedding venue and if that was the case it would fund itself.  It would attract people from outside the area and that would definitely be the right way to go.  There is so much more we could do. If we can run weekly trips from Keswick people could come and see what amazing history we have in Workington.’ He added a lot of work is already being done to highlight Workington’s history by the town council and that he would also like to see a festival celebrating the town’s links with Mary Queen of Scots.

A spokesman for Allerdale council said: ‘Allerdale Borough Council has secured a £150,000 grant from Historic England to carry out works to Curwen Hall, Workington, which will support the council’s aim of getting the building taken off the ‘at risk’ register. The council is also putting in £50,000 towards the project which will see various repair and consolidation works carried out on the Grade-I listed building. Due to an ecological window, the earliest the works can be started will be in February next year with the project expected to be completed in June 2020.  The council would like to thank Historic England for their support for this scheme and accommodating its timescales.’