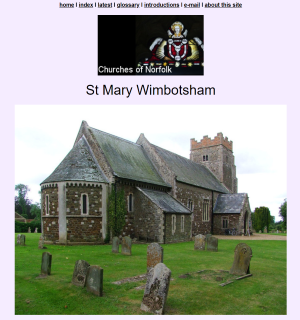 A 12th Century Norfolk church, St Mary the Virgin Wimbotsham has been gutted by a fire, highlighting the ongoing relevance if the IHBC’s Nottingham 2019 School on Heritage Risk and Resilience’.

[St Mary Wimbotsham] was destroyed by fire on the morning of 4th September 2019, bringing to an end a delightful example of a typical rural 19th Century restoration. This page will remain as a legacy until such a time as the newly restored church at Wimbotsham rises from the ashes.

On the map, we appear to be on the northern outskirts of the little town of Downham Market. But in reality Wimbotsham is a lovely little village, set off the main road and a sister to the better-known Stow Bardolph across the A10. The two churches were also similar, with chunky carstone towers looking as if they were made of gingerbread, and substantial Norman-detailed naves with 19th century chancels. Wimbotsham didn’t have the massive and extraordinary Hare mausoleum that graces Stow Bardolph, nor anything as famous as the effigy of Sarah Hare, but here was a fine and interesting medieval church which was always open and welcoming.

Wimbotsham’s most memorable feature survived the fire, of course. It is around on the south side of the church, away from the road, one of the largest Norman doorways in west Norfolk. It dominates the south side, contrasting pleasingly with the carstone wall and windows. Its outline is not discernible from inside the church, and I wonder how many people miss it.

Before the fire you were able to step inside to the feel of a church that was overwhelmingly 19th century in character, a less stark version of the same thing at Stow Bardolph. I assume that the restorations were near-contemporary and perhaps even by the same hand. Part of this was the simple beauty of the east end, an apse formed at the end of the chancel. The juxtaposition of the chancel arch with the arch into the apse gave the illusion of a crossing beneath a central tower. Also, there were wonderful bench ends, very much in the Suffolk style of the 15th century. This was another illusion, for as Pevsner notes they were almost entirely the work of that Victorian master craftsman James Rattee, although a few broken medieval originals did survive the 19th Century restoration. My favourites were the man telling his rosary beads and the pig-in-a-wig with a centre parting, as if he was going on a date in the 1950s.

High up on the apse was a boss of the Lamb of God, very much in the 14th century style and similar to those in the vaulting at Wymondham Abbey. Whilst the 1850s glass of evangelistic symbols was unobstrusive, the stone pulpit was perhaps a little awkward, detracting as it did from the intriguing roodloft stairs, which rise up from a window embrasure through the thickness of the Norman walls. Echoing it, across the nave was an impressive piscina. Was it old, or the product of a fairly severe 19th century recutting? Or even an entirely 19th Century original? After all, as the crossing and the bench ends show, the Victorians were extremely clever here at Wimbotsham, and perhaps the only thing we could really have been sure of was the simple and pleasant beauty of a well-loved and cared-for space.