IHBC’s ‘Heritage from the doorstep’: Plymouth’s Everyman Cinema a step closer to opening 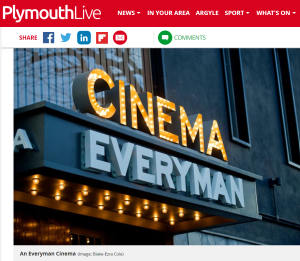 The boutique cinema chain Everyman will be coming to the Grade 1 listed Royal William Yard in Plymouth, reports Plymouth Live.

Plans for a new boutique cinema in the Royal William Yard are set to come a step closer. Planning officers are recommending the developer is allowed to change the use of the Melville Building from a hotel to a cinema. The grade one listed building is the centrepiece of the redeveloped former naval yard at Stonehouse.

The square limestone and granite structure which was mostly finished in 1832 is notable for its striking archway and clock on a turret fronting the marina.  It is one of the last buildings to be completed as part of the regeneration of the yard for leisure, offices and homes.  The developer is asking the city council to remove a planning condition for a hotel and to change leisure use at the site from a gym to cinema.  A report on the planning application says the 187-seat cinema would be more viable than a hotel for the building.  Although the original policy for the yard included a hotel, it now appeared the construction costs would be too high.

The report said planning permission was granted for a hotel in 2014 and operator Watergate Bay spent a year developing an £18m scheme but pulled out because of the cost of repairs to the building.  It said Urban Splash had been in talks with hotel operators of all types since 2015. A study concluded that it was economically unviable to develop the Melville Building as a hotel.  Historic England said it had no objection to the change of use and welcomed the plan to open the building.

It said: ‘Historic England is strongly supportive of these proposals, which will provide a sustainable new use for part of the Grade I listed Melville Building, a long-standing entry on our Heritage at Risk register, without any adverse impact to its significance…’

The council’s highways team raised no objection to the plans…