IHBC’s ‘Heritage from the doorstep’: £1.5m boost for regeneration of Bradford’s Conditioning House 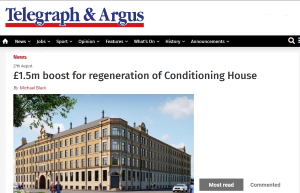 A project to restore a major heritage building in Bradford, the Conditioning House, a Grade II listed warehouse and part of the Bradford City Centre Heritage Properties Scheme, is likely to get a £1.5 million boost.

The Telegraph and Argus writes:

Work to restore Conditioning House, a derelict Grade II listed warehouse, is due to start in full later this year. The project, by the Priestly Group, will create 150 one and two-bedroom flats and commercial space. Next week West Yorkshire Combined Authority will discuss proposals to invest £1.5 million from the Leeds City Region Local Growth Fund to help finance the restoration. The overall project to restore the building, on Cape Street near Forster Square, is expected to cost over £8.5 million.

A report prepared in advance of the Authority’s Investment Committee meeting on September 3, said the transformation of the building, empty for more than 25 years, could attract further investment in the Forster Square Regeneration Area. The work is expected to be complete by September 2020.

Councillor Peter Box, Chair of the Combined Authority’s Investment Committee and Leader of Wakefield Council, said: ‘The restoration of Conditioning House could act as a catalyst to completely transform this part of Bradford City Centre. This is exactly the type of the project the Local Growth Fund was set up to help – ones which will have a long-lasting impact on communities by providing jobs, new homes and spaces for local businesses…’

Conditioning House is part of the Bradford City Centre Heritage Properties Scheme which is planned to deliver up to 283 new homes and commercial floor space in Bradford city centre through the refurbishment of key heritage properties. The scheme could see a total of £7.4 million invested in restoring city centre buildings.

Councillor Susan Hinchcliffe, Chair of the Combined Authority and Leader of Bradford Council, said: ‘Bradford is proud to have one of the most beautiful city centres in the UK. Our heritage buildings are spectacular and mark us out from the crowd. Every visitor who comes is impressed by them. Growing numbers of people want to live in the heart of the city, where they are close to entertainment, transport links and their jobs. We need more restoration projects like this to ensure the buildings that mark the foundation of our great city are at the heart of its future success. It’s about re-purposing our heritage so that these proud buildings can live again.’