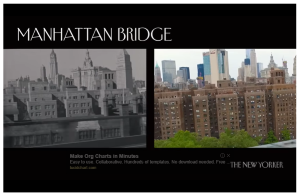 An Open Culture article takes a look at American Cities of New York, Los Angeles and Detroit comparing how they look now compared to the 1930s and 1940s.

Palimpsest has become clichéd as a descriptor of cities, but only due to its truth. Repeatedly erasing and rewriting parts of cities over years, decades, and centuries has left us with built environments that reflect every period of urban history at once. Or at least in an ideal world they do: we’ve all felt the dullness of new cities built whole, or of old cities that have barely changed in living memory, dullness that underscores the value of places in which a variety of forms, styles, and eras all coexist. Take New York, which even in the 1930s presented the genteelly historical alongside the thoroughly modern. The New Yorker video above places driving footage from that era alongside the same places — the Brooklyn Bridge, Central Park, Harlem, the West Side Highway— shot in 2017, highlighting what has changed, and even more so what hasn’t.

Los Angeles has undergone a more dramatic transformation, as Kevin McAlester’s side-by-side video of Bunker Hill in the 1940s and 2016 reveals. ‘An area of roughly five square blocks in downtown Los Angeles,’ says The New Yorker, Bunker Hill was from 1959 ‘the subject of a massive urban-renewal project, in which ‘improvement’ was generally defined by the people who stood to profit from it, as well as their backers at City Hall, at the expense of anyone standing in their way.’

The 53-year process turned a neighborhood of ‘some of the city’s most elegant mansions and hotels,’ later subdivided and ‘populated by a mix of pensioners, immigrants, workers, and people looking to get lost,’ into an attempted acropolis of works by architectural superstars, including Frank Gehry’s Disney Concert Hall, recent Pritzker-winner Arata Isozaki’s Museum of Contemporary Art, and John Portman’s (movie-beloved) Bonaventure Hotel.

Above the classic American buildings of Detroit stands another of Portman’s signature glass-and-steel cylinders: the Renaissance Center, commissioned in the 1970s by Henry Ford II as the centerpiece of the city’s hoped-for revival. Three decades earlier, says The New Yorker, ‘Detroit was the fourth-largest city in America, drawing in workers with opportunities for stable employment on the assembly lines at the Ford, General Motors, and Chrysler plants.’ But soon ‘factories closed, and jobs vanished from the city that had been the center of the industry.’ The Motor City’s downward slide continued until its 2013 bankruptcy, but some auto manufacturing remains, as shown in this split-screen video of Detroit over the past century alongside Detroit in 2018. It even includes footage of the QLine, the streetcar that opened in the previous year amid the latest wave of interest in restoring Detroit to its former glory. As in any city, the most solid future for Detroit must be built, in part, with the materials of its past.