IHBC’s ‘Heritage from the barstool’: Kray Twins historic pub saved from last orders in major campaign, from The Mirror 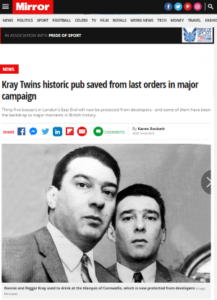 The Mirror has reported on how ‘thirty-five boozers in London’s East End will now be protected from developers… some of them… the backdrop to major moments in British history.’

Dozens of historic pubs, including one used by the Kray twins, are being saved from last orders.

A list of 35 watering holes in London’s East End are being granted protection from developers following long-running pressure by real ale campaigners CAMRA.

The boozers in the borough of Tower Hamlets have been identified as ‘assets of local importance’, meaning they cannot be bulldozed in the course of building work.

The borough council is believed to be the first local authority in the country to offer protection to pubs which are significant but not important enough to be registered by Historic England. Now campaigners hope other councils will follow.

Among the bars being saved is the 154-year-old Marquis of Cornwallis, a favourite haunt of Sixties gangster kings Ronnie and Reggie Kray.

Similar protection is given to The Ship, where engineer Isambard Kingdom Brunel enjoyed a drink during building of the Great Eastern steamship at nearby Burrells Wharf.

Also on the list is The Bow Bells – where the loos are said to be haunted – and the Lord Morpeth, which was frequented by the Suffragettes. Another is The George, used as an unofficial meeting place for Millwall FC in the 1890s and visited by film star Jayne Mansfield in 1959.

In the past 18 months, more than 1,140 pubs in England and Wales have closed down, with many demolished or converted into homes or offices.

The council’s Ann Sutcliffe said: ‘Pubs have been the beating heart of communities in the East End for generations. They are valued additions to the landscape.’