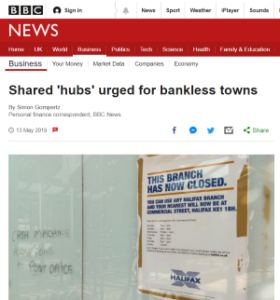 Banks have been urged to create local ‘banking hubs’ for customers if there is a threat to the last branch in town.

The big four banks Lloyds, Barclays, HSBC and RBS would fund the hubs, which could be in Post Offices, but would have specially trained staff, MPs said.

The government might have to change competition law to allow banks to share facilities in this way, MPs said.

The Treasury Select Committee came up with the idea of local banking hubs as a way of dealing with the fallout from mass closures of branches.

It says there are still large sections of society which depend on branches and that banks cannot rely entirely on their online and mobile services, which have proved so vulnerable to IT failures.

Post Office reliance
As things stand, when the last bank in an area shuts down, customers are ushered towards the nearest Post Office to do their banking.

But while you can take out and deposit money and check your balance, there is no banking specialist on hand and you can’t get help setting up basic transactions like direct debits.

You can do almost as much using a cash machine.

On top of that, the Post Office actually makes a loss from providing limited banking services. The Committee says the taxpayer should not be subsidising the banks.

In fact three of the biggest banks, Lloyds, NatWest and Barclays, have already banded together to provide banking hubs for small businesses.

Six have been opened so far this year in Birmingham, Manchester, Crosby, London, Leicestershire and Bristol.

And in Scotland the Deputy First Minister, John Swinney, has called for banking hubs for personal customers after a swathe of closures from RBS, Clydesdale and TSB.

The suggestion is that different banks would take turns, using the same office on alternate days.

So there could be a future for the banking hubs idea if ministers can be persuaded to get behind it.

For next year’s IHBC School, on ‘Old Towns : New Futures’ – see Brighton2020.ihbc.org.uk where you sign up for the IHBC’s 2020 School alerts, and you can follow twitter updates at #IHBCBrighton2020