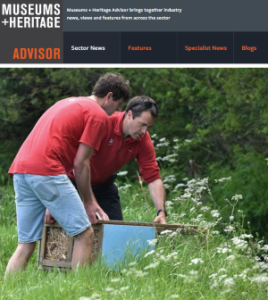 In its annual report for 2018/19 National Trust has revealed that it spent £148 million on conservation and restoration projects across its portfolio of properties, while benefitting from a membership surge.

This sizeable investment has been facilitated by unparalleled visitor numbers and memberships. The last financial year saw the organisation’s membership swell to 5.6 million people, with a total of 26.9 million visits made to National Trust sites.  The £148 million in conservation and restoration expenditure for 18/19 represents a rise of more than £10 million compared to the previous year and is equivalent to the organisation spending more than £405,000 per day on its sites across the UK.

Membership numbers leapt up by around 400,000 during 2018/19, taking the total up to 5.6 million. The unprecedented visitor figures of almost 27 million at National Trust sites also represents a year-on-year rise, and follows the introduction of two new member schemes. As part of these new initiatives, over 28,000 under 15s signed up for the new junior membership for £10 per year and almost 26,000 people accepted the offer of a free essential companion card for visitors who require support or care.

Sharon Pickford, Director of Support and Revenue, National Trust said: ‘We aren’t complacent and we know there are many more people who may like the opportunity to access and enjoy what we have to offer.’

Another area of growth for the organisation was fundraising, which saw revenues rise from £94.3m in 2017/18 to £97.8m last year. Interestingly, the charity’s operating margin actually shrunk slightly over the same period, from 21.4% to 19.7%.

In 2018/19 National Trust laid out around £148 million on the 780 miles of coastline, 248,000 hectares of land and 500+ historic houses, gardens, parks and countryside it oversees across the UK. This money was allotted as follows:

Following the release of the latest statistics, National Trust’s Director of Support and Revenue, Sharon Pickford, said: ‘Our work to care for these places is only possible through the generosity of our members, visitors, volunteers, funders and donors. Without them we simply wouldn’t be able to spend record levels on conservation and access work to ensure more people have a great experience when they come to our places.  This year we welcomed record numbers of visitors, and it is fantastic to see even more people exploring what we have to offer and learn about nature and heritage – especially young people who have been joining us in their tens of thousands.’

The work of volunteers is also crucial to the positive trajectory of the trust’s finances. Last year 65,000 volunteers collectively donated over 4.8m hours to the organisation. National Trust points to figures which claim those who would ‘strongly recommend’ volunteering at one of its sites have now reached 67%, its highest level ever. 95% would, according to the same survey, ‘recommend’ volunteering for the charity.

‘We aren’t complacent and we know there are many more people who may like the opportunity to access and enjoy what we have to offer,’ Pickford concluded. ‘We will continue working to provide events and activities which cater for a wide spectrum of the public, while ensuring we look after special places in our care.’