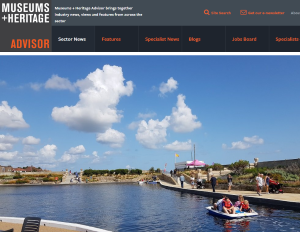 Great Yarmouth’s 91 year old Venetian Waterways has been re-opened to the public following a £2.7 million regeneration project, supported predominantly by a £1.7 million National Lottery Heritage Fund grant, as reported by the  Museums and Heritage Advisor.

The Norfolk seaside town’s Grade II listed seafront attraction opened in 1928 and proved a hit with many visitors to what was then one of the nation’s most glamorous coastal destinations. Renowned for unconventional planting, rivers, rock gardens, bridges and quirky thatched shelters, the park was designed to give brits who couldn’t afford foreign travel a flavour of the exotic lands which lay beyond domestic shores.

The latter stages of the 20th century weren’t kind to the area, leading ultimately to the loss of historic features and planting, before the Boating Lake was drained in 2014. A National Lottery grant of £1.7 million has now enabled Great Yarmouth Council to reverse some of these changes, with the restoration of the original planting, thatched shelters and bridges, along with the reintroduction of both the Island Café and Boating Lake after almost a decade of combined closure.

Councillor Graham Plant, Chair of the economic development committee, Great Yarmouth Borough Council [said] ‘The Waterways has regained its magical sparkle thanks to everyone involved and it will improve further still as the restoration continues, the plants mature and the Boating Lake and Island Café come alive again with visitors,” Councillor Graham Plant, chairman of the economic development committee, Great Yarmouth Borough Council, proudly stated at the re-launch event. As part of our wider regeneration of the seafront, this restoration contributes to a lasting legacy for the borough and the people involved, saving our cultural heritage for future generations, supporting the local economy, boosting civic pride and providing people with opportunities to improve skills and access further training or employment,’ he added.

For background see the NewsBlog