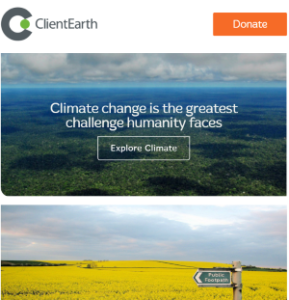 Lawyers from ClientEarth are putting 100 local authorities across England on notice, warning them that they will violate their legal obligations and risk legal challenge if they do not introduce proper climate change plans.

The environmental lawyers are writing to each local authority that is currently developing a new local plan, giving them eight weeks to explain how they will set evidence-based carbon reduction targets and ensure these targets are then central to their new planning policy. Amid growing pressure for local governments to declare ‘climate emergencies’, ClientEarth launched the campaign in light of the massive shortfall in compliant local planning policy across the country and to advise authorities of their legal duties under planning and environmental law.

ClientEarth climate lawyer Sam Hunter Jones said: ‘There is a collective failure by local authorities across England to plan adequately for climate change. Too often climate change is perceived to be just a national or international issue and therefore solely the responsibility of central government. Clearly central government needs to do more, as the recent Committee on Climate Change (CCC) progress reports stress. Yet so many of the daily decisions around new and existing infrastructure – such as new buildings, roads and utilities – are made at the local level. All of these decisions will ‘lock in’ an area’s future emissions and its resilience to climate change. Scientists warn that we have 10 years to transform our economies and avoid catastrophic climate change, but decisions that will have ramifications for decades are being made now by authorities with no idea if these decisions are consistent with national and international commitments to limit emissions. In July this year, the CCC criticised the UK’s continued failure to take action on emissions from buildings and transport – two sectors where local planning plays a critical role.’

Hunter Jones said that while many local authorities face difficult economic conditions, there are substantial benefits to climate-sensitive planning, such as improving local economies and creating jobs. [He said] ‘Climate action at a local level can transform people’s quality of life for the better, with clear net benefits to health, air and water quality, employment, energy affordability, community cohesion and biodiversity.’

Local authorities across the country have declared climate emergencies and announced local carbon reduction targets. At the city level, Greater Manchester and London have committed to net zero emissions targets by 2038, while Bristol and Leeds are aiming for 2030 and Nottingham for 2028. ClientEarth has written to councillors and planning officers from areas that are revising their local plans, reminding them of their legal responsibilities. These duties include setting targets and policies based on the local potential to reduce emissions, and that are at least in line with the UK’s Climate Change Act. The latter target was recently increased to net zero greenhouse gas emissions by 2050, meaning that all sectors now need to plan for full decarbonisation.

Lawyers said that for carbon targets to be meaningful, they need to be incorporated into local planning policy as a core objective against which all other policies and decisions will be tested. Local planning authorities also need to monitor performance against local targets at least annually.

‘Each and every planning decision taken today must be in line with long-term climate goals, because what and how we build today will determine our climate impact and resilience in the crucial decades to come,’ Hunter Jones said.