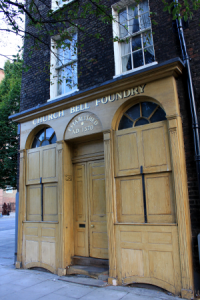 Whitechapel Bell Foundry closed in June 2017, having cast bells in the East End for almost 450 years, but the East End Preservation Society is trying to secure its survival.

The East End Preservation Society has launched a fresh campaign, directly petitioning Tower Hamlets Council to preserve the foundry, on the grounds of its great historical import. Operating in Whitechapel from the 1570s — and from its current location since the mid 1740s — the foundry had produced world famous bells, including Big Ben, and the Liberty Bell. Before it shut its doors, Whitechapel was one of two remaining bell foundries in the UK.

The site is now owned by property developer, Raycliff, which wants to turn the site into a boutique hotel. Although Raycliff’s plans do set out to pay homage to the site’s history, many locals and fans of the foundry — including the Gentle Author — say this is not enough, and that the foundry should continue to operate.

Can it viably continue to operate? The United Kingdom Historic Building Preservation Trust thinks so; it has set out its own vision [pdf] for how Whitechapel Bell Foundry could still make bells on site, as well as sculpture art. (And not a boutique hotel in sight.) And the plot has now thickened, with the revelation that something of importance may have been uncovered beneath the foundry, by archaeologists. A Tower Hamlets Council spokesperson told Londonist: ‘Initial archaeological works on site have revealed remains which require further investigation. The application will go to the Development Committee on 19 September. The Greater London Archaeological Advisory Service (part of Historic England) are providing advice to the council.’

The Council won’t tell us what these remains are. We’ll have to wait until mid September to find out. But perhaps the death knell for this singular East End institution hasn’t been rung just yet. Sign the petition to keep Whitechapel Bell Foundry alive. It runs until 13 September 2019.