IHBC’s ‘Heritage from the doorstep’: Experts refuse to list Wolverton’s controversial Agora as an historic building 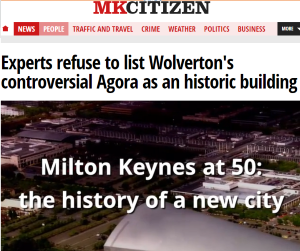 MKCITIZEN has reported on why Historic England rejected the case to list the controversial Wolverton Agora Centre as a building of historic interest.

[Historic England’s] decision means developers will now be free to demolish the Church Street building and replace it with housing. A bid was made earlier this year for historic listing, which could have thwarted the development plans. The identity of the person that made the application is not known.

… Historic England officers revealed the case had been turned down. Their report stated: ‘Architecturally it is not a beautiful building externally, the large areas of brick walling make the exterior rather forbidding and the interior is very dark: it does not live up to the promise of the exciting 3D visualisations drawn up when it was being planned. For these reasons, and unlike some of MKDC’s buildings, the Agora does not appear to be well regarded by local people.’ It added: ‘The centre was clearly designed to have importance for its local community, but it could be argued that a true test of local interest would be a thriving shopping centre with regular activity in the central square. As it is, the centre has proved consistently hard to fill with tenants and use of the central area has been inconsistent, with periods when it was not used.’

It concluded: ‘After examining all the records and other relevant information and having carefully considered the architectural and historic interest of this case, the criteria for listing are not fulfilled.’

Inspectors said the building, although clearly representative of its time, was ‘firmly placed against the grain of the existing town plan’ and its appearance has been compromised by numerous incremental changes. They also said the Agora does ‘not exhibit any technological innovation’ in its design, or associations with notable characters or events to warrant a listing. They added: ‘Although placed at the heart of Wolverton and close to several listed structures, there is little sympathetic alliance of function or aesthetic between them and the Agora Centre. Their proximity is not sufficient to override the lack of architectural or historic interest.’

This summer the Agora has been transformed by art projects held by the community as a farewell gesture to the building.