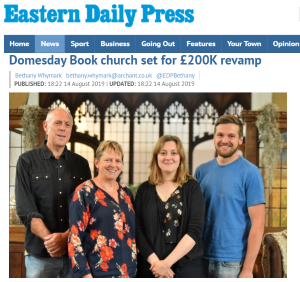 The Norwich Historic Churches Trust (NHCT) has secured a £218,000 grant towards repairs at St John de Sepulchre, ‘one of 25 in the city founded during the 10th century’.

Norwich Historic Churches Trust (NHCT) has secured a £218,000 grant towards repairs at St John de Sepulchre, on the corner of Finkelgate and Ber Street. The church, mentioned in the Domesday Book, is one of 25 in the city founded during the 10th century although much of it now dates from the medieval period. However, structural issues have left the building at risk. In 2018 Historic England provided a development grant which allowed NHCT to carry out architectural investigations and develop a project. It has provided the latest grant to enable restorations to go ahead.

The repairs, due to start in November and be completed in 2020, will also enable the building to be removed from the Heritage at Risk Register. Mark Wilson, NHCT conservation manager, said: ‘We’re very grateful to Historic England for supporting this project to save such a beautiful church and an important piece of Norwich’s history. We’re incredibly lucky to have access to so many medieval church buildings in Norwich. We believe they are a vital part of Norwich’s cultural heritage and are something that should be cherished and cared for.’ He added: ‘We still have £12,000 to raise before the project is fully funded, so any contributions would be gratefully appreciated.’

Dr Natalie Gates, partnerships team leader at Historic England in the East of England, said: ‘St John de Sepulchre is an outstanding example of an East Anglian medieval church. We are delighted that the essential repair work to this grade one-listed building is now able to progress, ensuring that it remains part of Norwich’s cultural heritage for future generations to visit, explore and enjoy.’

St John de Sepulchre is one of 31 surviving medieval parish churches in Norwich, according to NHCT. It was restored in the late 19th century, benefitting from the Victorians’ interest in reviving medieval architectural styles. After becoming redundant in 1984 it was used by an Eastern Orthodox congregation between 1986 and 2009. It stood empty for a number of years before being used by wedding and ceremonies venue The Flint Room, the tenants of which have supported NHCT in the restoration project.