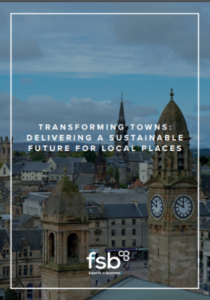 The Federation of Small Businesses(FSB) has published a new report – ‘Transforming Towns: Delivering a sustainable future for local places’ – that calls for ‘a slew of measures to boost Scotland’s 479 local towns’, that may be especially relevant to any interested in IHBC’s 2020 School theme: ‘Old Towns: New Futures’.

The Federation of Small Businesses (FSB) revealed this figure as they published a new report calling for a slew of measures to boost Scotland’s 479 local towns.  The study – called Transforming Towns – urges the Scottish Government and the UK Government to direct the Scottish National Investment Bank and the UK Stronger Towns Fund respectively to invest in these places. FSB argues that these funds should set aside £90 million every year over the next decade to invest in projects to make Scottish towns better places to work, live and run a business.

Andrew McRae, FSB’s Scotland policy chair, said: ‘More people in Scotland live in towns than cities. That’s why governments in Edinburgh and London must make a generational investment in our towns to overcome their current challenges and prepare them for how we’ll work and live in the future.’

The report highlights innovative work to fill empty units, but urges Ministers in Edinburgh to establish a commission to tackle the rise of vacant properties. Further FSB makes the case for the Scottish Government to investigate rolling out a standard small business lease for commercial premises.

Andrew McRae said: ‘Following FSB campaigning, last year the Scottish Government announced extra funding to boost Scottish towns. We need to build on this initiative because inclusive growth can’t only be a priority for city-dwellers. After the wave of recent closures, we need to rethink how we use our high streets. A new commission should investigate the barriers to bringing vacant properties back into use, even if that means turning offices into housing, or department stores into art galleries. Similarly, we need to make it cheap and easy for independent businesses to take up high street property and we believe a standard small business lease could be part of this solution.’

In the last three years, over 300 local bank branches have closed or are winding down across Scotland. FSB has warned that the big banks must deliver on their promise of shared banking hubs, especially in the largest branch-less towns. The report also argues for a new town-by-town business support programme – rolled out by Scottish Enterprise – to help high street businesses make the most of new technologies. Andrew McRae said: ‘In terms of local closures, the banks are the worst offenders. At the very least, they should make good on their promise to roll-out shared banking hubs and we’d urge them to start with the largest bank-less towns. Many smaller businesses are at the forefront of using new technologies to boost their efficiency, productivity and most importantly sales. But others may be behind the curve. Scottish Enterprise should develop a programme to give local traders a helping hand.’ 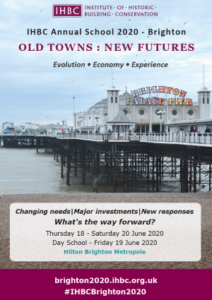 For next year’s IHBC School, on ‘Old Towns : New Futures’ – see Brighton2020.ihbc.org.uk where you sign up for the IHBC’s 2020 School alerts, while you can follow twitter updates at #IHBCBrighton2020