After #IHBCNottingham2019 closed, the debate extends… with the New York Times ‘orderly retreat’ and ‘What should communities do as… sea-levels rise?’ 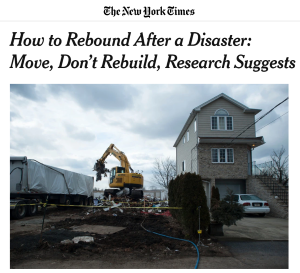 The New York Times has featured wider ‘discussion of orderly, strategic retreat from areas at risk’, specifically in the face of climate change.

A paper published… in the journal Science makes a case that, sometimes, retreating from nature instead of fighting it can actually open up new opportunities for communities. ‘There’s a definite rhetoric of, ‘We’re going to build it back better. We’re going to win. We’re going to beat this. Something technological is going to come and it’s going to save us,’ ‘ said A.R. Siders, an assistant professor with the disaster research center at the University of Delaware and lead author of the paper. ‘It’s like, let’s step back and think for a minute,’ she said. ‘You’re in a fight with the ocean. You’re fighting to hold the ocean in place. Maybe that’s not the battle we want to pick.’

In fact, people have often retreated after catastrophic weather events. New Orleans, for example, lost roughly half of its population after Hurricane Katrina in 2005, and the city’s population is still only 85 percent of what it was before the storm. But those retreats have generally been ad hoc, not managed, and not necessarily done with broader social interests in mind.

… The new paper lays out ways communities could practice managed retreats that would address their broader needs. Lack of access to reliable climate-hazard maps, for example, makes it difficult to make informed choices about risk. Such maps must be improved and updated regularly, the paper said.

… Dr. Siders pointed to Soldiers Grove, Wis., a town of about 500 that, after one too many floods, moved itself out of the flood plain….

… ‘Retreat, in practice, depends at least as much on sort of social, economic, cultural geography,’ Dr. Koslov said. ‘It’s not that everywhere should retreat,’ Dr. Siders said. ‘It’s that retreat should be an option. It should be a real viable option on the table that some places will need to use.’