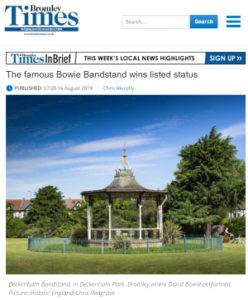 Known to almost everyone as the Bowie Bandstand, The Bromley Times applauds its recent listing as ‘it should be protected forever’.

David Bowie was one of the most influential musicians of the 20th century with a career spanning nearly 50 years. He moved to Bromley aged eight and later lodged in Foxgrove Road, Beckenham with Mary Finnigan, his landlady and later his lover. Right after Space Oddity’s success, he organised the iconic Growth Summer Festival in August 1969. The hope was to raise money for a permanent base for his and Finnigan’s Beckenham Arts Lab project, which began life as a folk club in the backroom of the nearby Three Tuns pub.

The bandstand was the centrepiece of the day and the stage from which the young Bowie performed to an audience of just a few hundred. Thought to be the first of its kind in the UK, the festival inspired Bowie to write Memory of a Free Festival, a seven minute song for his second album released later that same year, in homage to the day. Historic England said Bowie spent some of his most creative early years in Beckenham, with Finnigan claiming he composed many songs whilst living under her roof. It has even been suggested that Bowie may have penned the lyrics to Life on Mars from the steps of the bandstand. Today it is known and loved locally as the Bowie Bandstand.

Making the announcement of Grade II listed status for the bandstand, heritage minister Rebecca Pow said: ‘David Bowie is a cultural icon and 50 years on from his performance at the Bowie Bandstand it is right that we remember his influence on music and culture in this way.’ And Duncan Wilson, chief executive of Historic England, added: ‘Walking past this typical yet characterful bandstand, you probably wouldn’t expect it was once the stage for a young man who would become one of the most iconic musicians of the 20th century.’ Designed by McCallum and Hope Iron Foundry it was built in 1905 and may be the only bandstand from this foundry still standing in Britain.