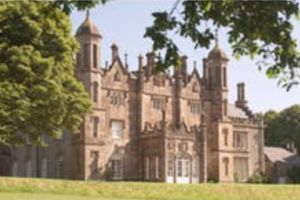 The IHBC’s Northern Ireland (NI) Branch has organised its next Continuing Professional Development (CPD) event at Glenarm Castle, with a morning dedicated to ‘conservation, diversification and sustainability’, including practical insights and onsite demonstrations from the estate manager, stonemasons and lime experts, concluding at 1pm with a networking lunch.

IHBC NI Branch Chair Des Cairns said: ‘Please do  join us on our visit to Glenarm Castle to learn about conservation, diversification and sustainability, including insights from the estate manager, stonemasons and lime experts.’

‘Glenarm is constantly evolving as an estate, including salmon farming, glamping, pedigree shorthorn herd, water turbine generation, fudge factory, music festivals coupled with a never ending programme of conservation works not only to the castle but the entire estate.’

‘We have arranged a tour of the Castle, a walk through the grounds and practical demonstrations on site.  We will finish off with a networking lunch, but inevitably there are only limited spaces so please do be sure to book now.’

‘We are particularly grateful too for the kind supported of Glenarm Castle, the Rock Stonemasonry, and Heritage Traditional building products.’

…Visit to Glenarm Castle to learn about Conservation, diversification and sustainability. Insights from the estate manager, stonemasons and lime experts. Get a tour of the Castle by the Butler, a walk through the grounds and finish with lunch. Practical demonstrations will take place on site. Limited spaces. Book now.

Registration 9am with coffee and tea at the Coach House.

Finishing off at 1pm with lunch.

Glenarm Castle is the home of Viscount and Viscountess Dunluce and their family. The present castle has been in the McDonnell family since it was first built in 1636. The McDonnells have been in Glenarm for nearly 600 years and the Estate has been in the family for 400 years. In the house you will see superb examples of Irish furniture as well as portraits of family members from the early 17th Century through to the present day. Before taking up full time residence at Glenarm the family lived most notably at Dunluce Castle.

The Walled Garden is one of Ireland’s oldest walled gardens. Originally created to supply the Castle with its fruit and vegetables, The Walled Garden is now filled with exciting flowers and specimen plants to interest the keenest garden enthusiast. Beautiful and filled with colour throughout the seasons, the garden is open from Easter, when you can see the fabulous displays of spring bulbs along with the apple and pear blossom, right up until the end of September when the garden is still in bloom with rich displays of herbaceous plants.

… The present castle was built by ‘Randle McDonnel knight Earl of Antrim having to his wife Dame Aelis O’Nill’ in 1636. It was the same square building we see today, but no architectural details remain apart from a coat of arms now incorporated in The Barbican gateway. It was probably a plain Irish Jacobean building with simple mullioned windows and a few embellishments.

In 1642 an invading Scots army burnt this castle, and thereafter the family lived first at Dunluce, and then at the nearby house of Ballymagarry, leaving Glenarm a ruin. A visitor in 1740 said ‘the walls seem to be entire, and for the most part sound. …

In 1750 Ballymagarry burnt down, and the fifth Earl moved to Glenarm. Christopher Myers, an English engineer, was employed on the castle. A ‘very knowing and experienced workman’ he was also employed to work on Ballycastle harbour. Myers transformed the ruin into a Palladian mansion. The main front had an eccentric appearance, for its entire fenestration consisted of three-light Venetian windows, possibly because Myers reused the original Jacobean mullioned openings. Curved colonnades swept forwards on either side, ending in pavilions with pyramid shaped roofs; the pavilion overlooking the river contained a banqueting hall. There was also ‘a spacious Grass-plat in Front, on which is a statue of Hercules of esteemed Workmanship.’…

Late eighteenth century plans exist for adding Adam-style reception rooms, but it was the 1820s before any new building was undertaken. …

The ‘Barbican’ gateway was also based on one at another house. This gateway, the revamped servants’ wing and four comer turrets were quickly built, but then money ran out, and the castle kept much of its Palladian features until the 1850s, when the ‘Wee Earl’, Anne Catherine’s nephew, completed the Morrisons’ plans.

… Another fire in 1965 led to the demolition of the servants’ wing, with the exception of the Kitchen, the only room in continuous use since the seventeenth century.

… The castle is now the home of Randal, Viscount Dunluce, son of the 14th Earl of Antrim, with his wife Aurora, their son Alexander and daughter Helena.

Find out more and book