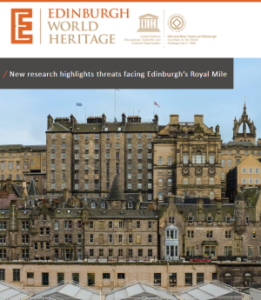 New research published by Edinburgh World Heritage concerning the authenticity of the Royal Mile reveals the threats and opportunities facing the historic thoroughfare in the heart of the Old Town.

New research published today by Edinburgh World Heritage concerning the authenticity of the Royal Mile reveals the threats and opportunities facing the historic thoroughfare in the heart of the Old Town. The research shows that the appeal of the famous succession of five separate streets is due to the historic character of its buildings, architecture, and streets, but that much of its local character is being lost, and that the ubiquitous gift and souvenir shops which line the Royal Mile are undermining its authenticity.

Edinburgh World Heritage conclude the report with a wide-ranging series of recommendations including calls to strengthen efforts to conserve key buildings through grants and expert support. Specifically, the charity calls out the future Transient Visitor Levy as a potential new source of funding to help repair and conserve buildings and streets requiring repair, or those damaged by climate change or other factors.

Other measures recommended include: strengthening and giving a more prominent voice to local communities in deciding the future of the Royal Mile, and introducing a voluntary ‘Made in Scotland’scheme to help support local manufacturers. Clamping down on misleading sales techniques and claims is also recommended, as well as a more proactive approach from the city in shaping the future retail character of the street in the way some other European cities have done…