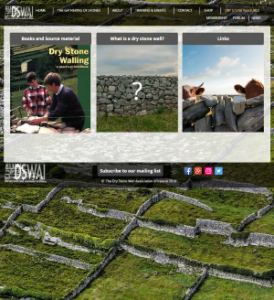 The Dry Stone Wall Association of Ireland(DSWAI) has received news that dry stone building has been acknowledged by the Department of Culture, Heritage & the Gaeltacht as part of Ireland’s Intangible Cultural Heritage.

In January 2018 The Dry Stone Wall Association of Ireland(DSWAI) submitted an application to the Department of Culture, Heritage & the Gaeltacht to have Dry Stone building added to the list of activities that are part of the Intangible Cultural Heritage of Ireland. On Wednesday 11th July 2019 we received news from the Department that the Minister had approved our application that day.

At their meeting on Mauritius on 28th November 2018 UNESCO announced the addition of Dry Stone walling to the listing of activities of Intangible Cultural Heritage. This was following a bid by eight countries including Croatia, Cyprus, France, Greece, Italy, Slovenia, Spain and Switzerland. Hopefully Ireland can now eventually join that list of countries.

Dry stone building of all kinds has been a human cultural activity for a very very long time. Here in Ireland many experts support the evidence based theory that Stone Age people built dry stone walls and monuments to facilitate farming and celebrate their dead. Ceide Fields, Newgrange, Poulnabrone Dolmen, Skellig Michael and Gallarus Oratory are some iconic examples of the dry stone built heritage of Ireland recognisable around the world.

When people began to gather stone and arrange it in rows to form boundaries it may have facilitated the emergence of the settled way of life from a prior hunter gatherer existence. Fields of dry stone walls cleared from the surface made the land more workable, gave shelter to crops and animals and created microclimates that allowed people to live together in larger and larger groups hence, from which it seems the great Irish megalithic monuments like Newgrange and the Dolmens evolved.  The activity then of collectively collecting and assembling stone in more and more ways has become a deeply seated cultural activity for Irish people that we freely recognise as a living part of our heritage.

Irish people love dry stone walls and buildings and we see them clearly as a symbol of ‘who we are’. Travelling around the country of Ireland dry stone structures are plentiful, particularly west of the river Shannon, in upland areas, and of poorer rocky land. Landlord estates from the time of Ireland’s time as a British colony show many miles of dry stone walls built by wallers from Ireland, England, Scotland and Wales who moved over and back between these countries actively sharing a common cultural heritage activity.

‘Dry stone walling and construction are synonymous with the evolution of Irish culture and heritage. Dry stone walls and buildings created sheltered spaces to live, keep animals and grow crops. They facilitated non-subsistence activities. Stone walls, as boundaries, in prehistory and historically were recognised assembly locations allowing the development of community or communal feasting activities such as games and trade.’ (DSWAI, ICH Expression of Interest submission 2018)

Globally, dry stone building is one of the oldest cultural activities. Dry stone structures withstand the test of time more so than more organic forms of building activity and as such they are our indicators and links to this now almost genetic predisposition to want to collectively handle and ‘build something in stone’. Dry stone walling has been with us for a very very long time. And given the acknowledgement now by 9 countries (of which Ireland is one) of dry stone building as an intrinsically cultural activity which is part of our living heritage  there can be no doubt that dry stone building is here to stay.