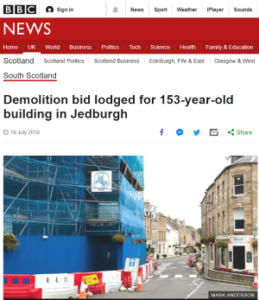 The BBC has reported on a prominent town centre building in Jedburgh, in the Scottish Borders, that may have to be demolished because it is crumbling.

Plans have been lodged to knock down the property at the corner of Market Place and High Street in Jedburgh.  The category C listed building was constructed in the town in 1866.   A supporting statement said a number of other options had been explored for the premises but the only ‘economically viable’ one was demolition.

It outlines the scale of the problems with the property.

Issues first became apparent with falling masonry, and scaffolding was subsequently put in place.  It later emerged that the stonework was in a worse condition than originally thought.  Additional scaffolding has resulted in the need for temporary traffic management measures.

‘This scaffolding and the associated traffic diversion and signage impacts significantly on the High Street and Market Square in particular and Jedburgh town centre in general,’ said the supporting statement.’

Scottish Borders Council said it was ‘very mindful’ of the adverse impact on the centre of the town of removing the corner building.

However, a guide for the redevelopment of the area has been drawn up.