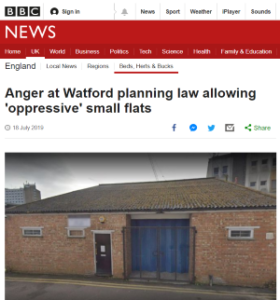 A mayor has called for a change in planning law after proposals to convert an industrial unit into 15 small ‘oppressive’ flats got the go-ahead.

ISE Investments has plans to convert the former upholstery business at Wellstones in Watford. Under 2015 rule changes, the firm only had to notify Watford Council and did not have to apply for permission. The council objected to the scheme but the firm won an appeal. Watford mayor Peter Taylor said it was a ‘disgrace’. The government is reviewing the rule changes over planning permission. The council was notified of the plans in 2017 under permitted development rules. It sought to block the plans on the grounds the new units could not be classed as dwellings because of their ‘oppressive nature’. In a report, the authority said: ‘Given the limited size of units and lack of daylight, ventilation, outlook, the development is considered to be poor and would not provide an adequate living environment for future occupiers.’

But ISE Investments, which is owned by Imran Dhanji, appealed to the Planning Inspectorate which found in his favour this month. The building has most recently been used by an upholstery firm and the drawings on the council’s planning portal show 15 self-contained flats and studios between 16.5 and 22 sq m in size. The minimum recommended size for a dwelling under government guidelines is 37 sq m, but it is not a legal requirement.

Planning inspector Steven Rennie rejected Watford Borough Council’s claim the ‘poor level of accommodation’ would not be dwellings and should not qualify under the permitted development rules. He said: ‘Whilst the bed-sits/studio units would be small, it has not been sufficiently demonstrated that the units would not be able to form a self-contained dwelling with day-to-day living facilities’. Liberal Democrat mayor Mr Taylor told the BBC: ‘It is a disgrace that central government has set such a low bar for the homes that people are expected to live in. They must review legislation surrounding permitted development to stop similar cases like this happening again.’ Julia Park, head of housing research at architecture firm Levitt Bernstein, said the inspector had to refuse the council’s decision because neither space nor daylight were considerations under permitted development. She added there was a good chance, once built, the flats were likely to fail to meet government housing standards. ‘So while the council can’t prevent the conversion, it could probably close down some or all of the flats the day they are occupied. It’s completely ridiculous,’ she said.

Ms Park called for permitted development to be scrapped and any applications to go to councils for permission. A spokesman for ISE Investments said: ‘We can understand the mayor’s comments and we appreciate the disconnect between central and local government in certain planning matters. Whilst some developers abuse these rights this is not our intention. As a technical point, windows would be normally introduced in a further, separate, alterations application as required when carrying out this type of permitted development conversion.’ A Ministry of Housing, Communities and Local Government spokesman said the government was reviewing ‘permitted development rights, particularly in respect of the quality standard of the homes delivered’.