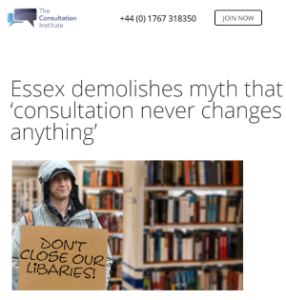 Following a public consultation that ‘revealed the strength of feeling towards library services’ – through months of protests involving hundreds of residents and the support of big names including David Walliams and Jacqueline Wilson – Essex County Council (ECC) has launched its Essex Future Libraries Strategy, which should mean that no libraries will close, while it offers ‘a significant support package to organisations wishing to take over delivery of library services’.

Cynics should read this!

It may not happen every day, but public consultations have the potential to make the difference far more frequently than is commonly thought. It is too easy to dismiss some exercises as tokenistic gestures with decisions already taken, but there are plenty of examples where managers and politicians genuinely listen or are prompted to seek alternative solutions. Libraries have been closed all over the UK, and many have ended up in the High Court amid arguments about forecasting the impact upon disadvantaged groups, but – starting with Warwickshire, which we featured in The Politics of Consultation, there are clear examples of creative problem solving arising from public consultation on library closures.

…. After months of protests involving hundreds of residents and the support of big names including David Walliams and Jacqueline Wilson, Essex county council has dropped plans to close 25 libraries.

The cuts, first proposed by the Conservative council in November 2018, involved closing 25 of the county’s 74 branch libraries, as well as handing a further 19 to volunteers and 15 to run in partnership schemes.

Residents have led multiple demonstrations over the last few months. More than 500 people joined what is believed to be the first ever protest march in the village of Galleywood in May, while more than 600 marched in Chelmsford in early June. Almost 60,000 people signed 56 different petitions, while the protests were supported by the likes of David Baddiel, Michael Rosen, AL Kennedy and Billy Bragg.

More than 21,000 responses were made to the council’s public consultation, which also triggered protests when residents complained that many of the questions were leading and did not allow for criticism of the council. An 18-page independent report into the consultation, conducted by Dr Tarek Al Baghal at Essex University and commissioned by campaign group Save Our Libraries Essex (SOLE), declared that the results would be questionable……

For more background see the article in Your Harlow which reports on Essex CC’s comment as follows:

The strategy, which will be available via https://libraries.essex.gov.uk/libraries-consultation later today, proposes a future for every single library in Essex, as well as giving the service the opportunity to expand.

The strategy comes following a public consultation which revealed the strength of feeling towards library services. Respondents were clear that library services are more than just books and computers and are an important community asset. The new strategy enables the library service, and each individual library to respond to the needs of the community it serves.

To allow this we will be offering a significant support package to organisations wishing to take over delivery of library services.

This includes grant funding of £18k over three years, an initial donation of books, refresh of reading materials and support to community-run library groups to train volunteers.

We have received 80 expressions of interest already from communities to manage community-run libraries. These community groups and organisations include parish councils, residents’ associations, pre-schools and village hall trusts.

Alongside investment in community libraries, we will also be investing in council run library services. During the strategy period we will invest in new technology and deliver a programme of refurbishment to library spaces by:

Refurbishing Council-run libraries to deliver a consistent high-quality look and feel across the Council-run network.

Up to date and flexible library management computer systems
Upskilling staff to improve the service to users
Embracing new technology and ‘smart libraries’ functionality that enables users to choose when and how they access books and learning materials.
Engagement with communities highlighted the importance of library opening hours. 62% of respondents to our 2018 engagement said convenient opening hours were important to them. Alternative opening hours, for example, evening or weekend opening, would encourage 39% of respondents to use libraries more.

Cabinet Member for Customer, Corporate, Culture and Communities Cllr Susan Barker said: “I am pleased to share with everyone our plans for future of the library service in more detail.

What is clear since we launched the public consultation is local libraries are important to residents, not just as places to get books or use a computer, but as spaces for people to meet, learn and exchange ideas.”

Following the consultation, which showed the sheer passion of communities to keep their local library, we have changed the strategy accordingly.”

The strategy now commits to no libraries closing within 5 years. By working with communities we can now keep a library service in every current location. The strategy also aims to revitalise the service through investment.

The service in its current form isn’t working and we know that there are better ways to run it. We are still concerned about the declining use but believe a combination of Council-run and community-run libraries offer the best hope to reverse the trend

The future of Essex Libraries is bright. This is a new, exciting chapter for the service that will be a service fit for the 21st century and that is genuinely in the hands of communities and local users, who can help mould it to what they want and need.”

The strategy will be discussed by Place Services and Economic Growth Policy Scrutiny Committee on Thursday and decided on by Cabinet on 23 July.

For further details on the Stategy see the Essex CC website