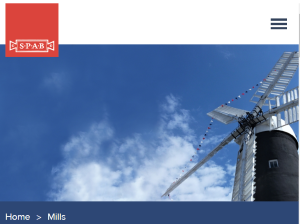 The Government has been considering whether to make it law that all flour should have folic acid added to it, with public consultation ending on 9 September, but if the proposals are adopted, SPAB argues that this could prohibit any unfortified flour being sold for human consumption.

As small-scale flour producers, traditional corn millers will find fortification of flour very difficult, if not beyond their capability, without a major investment in expensive new equipment which may even be impossible to install given space constraints and the listed building status of their windmill or watermill. The inability to sell flour could potentially see the end of milling in traditional mills, something the Mills Section would wish to fight against strongly.

Whether flour should be fortified with folic acid is very much a personal matter and the Mills Section does not seek to influence your views on that. We fully support the intention to minimise the risk of neural tube defects in pregnant women, which is the reason for the proposal, however if mandatory fortification of all flour threatens to prevent windmills and watermills from producing flour to sell, we would wish to raise our concerns with the government. We and the Traditional Cornmillers Guild (TCMG) consider that an exemption for small-scale producers could be included in any change to the regulations without substantially affecting the proposals, and ask for your support in this.

The TCMG has produced a paper setting out the background to the proposals and some of the issues affecting those milling in traditional windmills and watermills; the document can be downloaded by clicking here. It also provides guidance on how to respond to the public consultation should you wish to do so.

The public Consultation Document and questionnaire can be found at www.gov.uk/government/consultations/adding-folic-acid-to-flour.

We urge you to read the documents and fill in the online questionnaire. It is really important that as many people as possible comment on the proposals.