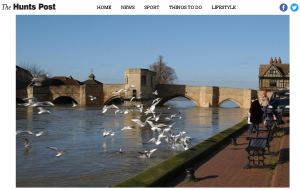 Future access to the lower floor and balcony of St Ives’ historic bridge chapel is in question over safety concerns, an issue The Hunts Post – which covers Huntingdonshire and South Cambridgeshire – looks at in more detail.

Historic England will have the final say over possible alterations to the Grade I-listed building which could allow the re-opening of the parts of the chapel which have been closed. Cambridgeshire County Council, which is responsible for the bridge, and St Ives Town Council, which manages the chapel for the county, are holding discussions about what can be done. The chapel itself remains open to the public and information boards showing images of the lower floor and the balcony will be installed. The 15th century bridge is one of only four left in the country with a built-in chapel – once a common feature.

Town clerk Alison Benfield said safety issues were raised by the Norris Museum which provides access for visitors. She said: ‘Now the issue has been raised we, the county and town councils, have to take it on board otherwise if there was an incident it could be said that we knew there was a problem and why had we not done anything about it.’ Mrs Benfield explained that the steps down to the lower floor were steep and narrow and there was no handrail. The metal balcony, which had been added to the building at a later date and was a popular attraction for visitors, also had a question-mark over its structural integrity.

‘Going down to the lower level is not risk free, although people have been doing it for centuries. We know there have been a number of incidents although they have not been officially reported,’ Mrs Benfield said. She said there had been no option but to close the lower level and balcony once a potential risk had been identified. Mrs Benfield said future access to the lower section would largely depend on what Historic England would allow by way of alterations. She added that display boards showing the lower level of the chapel would be beneficial to visitors who were unable to use the stairs. The chapel was built in 1426 as part of a stone bridge which replaced a wooden structure – and it is not the first time it has run into safety issues. At some stage two extra floors were added to the top of the chapel but their weight started to cause structural problems and they were taken down in 1930. It had also fallen into disuse as a chapel, becoming a ‘bawdy house’ in the 18th century when it was the last stop for drovers taking their cattle to London. It was also a pub known as ‘Little Hell’ and served as a doctor’s surgery.