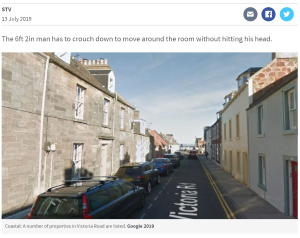 A North Berwick couple who appealed a ban on putting bigger windows in their cottage so that, they argued, the husband could fit in the bedroom, has lost its case, and the IHBC has advice for those planning change to designated fabric over the longer term.

Reflecting on the complex background to the case – which included a successful application some years previously – IHBC Policy Chair Roy Lewis observed: ‘People considering purchasing a listed building need to give consideration as to whether the property is likely to meet their future requirements.’

‘Whilst most local planning authorities make every effort to ensure that the needs of owners are satisfied, the purpose of listing buildings is to preserve their special interest and this can restrict the scope for alteration and extension.’

The couple, who failed in a bid to overturn East Lothian Council’s decision not to allow planning permission to expand their dormer windows, have now lost a second appeal against the local authority’s refusal to grant listed building consent for the change.

That appeal went to Scottish Ministers, who were told that the husband was ‘6ft 2in and can only manage to get into the bedroom but must crouch down to get around the bed without hitting his head on the coomb ceiling created by the small styled dormers’.

However, the Scottish Government Reporter has backed the local authority’s refusal to grant consent for the changes to the C-listed cottage, which sits on Victoria Road and can be seen from West Beach.

The 19th-century cottage is listed as category C because of its lower eaves, which are deemed of special interest by Historic Environment Scotland…

Rejecting the appeal, the Reporter said the change to the look of the cottage which the new window would create would be a ‘very radical change’ to its traditional character.

He said: ‘It would not preserve the listed building or its setting or the features of special architectural or historic interest which it possesses… I conclude that the proposal would not preserve or enhance the character or appearance of this very visible part of North Berwick Conservation Area.’