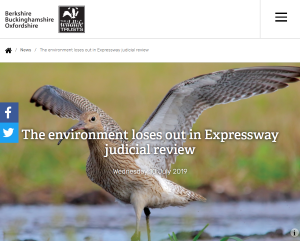 The High Court has thrown out a legal bid to save wildlife along the route of the new Oxford to Cambridge Expressway, as the Berks, Bucks and Oxon Wildlife Trust (BBOWT) had argued against the chosen route of the line, saying that it would have a ‘devastating impact’ on habitats.

Following the decision campaigners said the result showed that ‘our planning system was broken’, and have said the decision of the Government to choose route B is the ‘worst option for wildlife’.  The row began when the trust was left furious with the Government’s decision to pick Corridor B, which they feel is the most detrimental to local wildlife.  In November 2018, the trust issued a claim in the High Court, challenging what they said was the Government’s failure to commission a Strategic Environmental Assessment (SEA) or a Habitats Regulation Assessment (HRA) as part of the process of selecting a ‘Growth Corridor’ (within which the Expressway and associated housing will be built).

The Expressway is a new road proposed by the government that will link Oxford and Cambridge, via Milton Keynes. The project also includes a proposed ‘Growth Corridor’ that will see the building of one million new homes between Oxford and Cambridge by 2050. Earlier last year, Highways England proposed three broad routes, or ‘corridors’, for the Expressway and Growth Corridor. On September 12, the government announced that they had selected ‘Corridor B’ to accommodate the Expressway and associated housing.

A spokesperson from Bucks Berks and Oxon Wildlife Trust said: ‘The High Court decision against Berks Bucks and Oxon Wildlife Trust (BBOWT) means the Government can press ahead with its plans for a new Expressway between Oxford and Cambridge without looking at the potentially devastating impact their corridor selection may have on the environment and wildlife. The ability of Government to get away with delivering a plan of this size without strategic environmental assessments and proper consultation shows that our planning system is broken. BBOWT is taking advice on appealing the decision and making a reference on a key point of environmental law to the Court of Justice of the European Union. BBOWT challenged the government for its failure to conduct a Strategic Environmental Assessment (SEA) and Habitats Regulation Assessment (HRA) – requirements under European law – before it chose a preferred corridor for the Expressway. This failure excluded key stakeholders, including expert ecologists, from the decision-making process, and the government chose the corridor that evidence shows to be the worst option for wildlife.’

BBOWT’s Head of Planning, Policy and Advocacy, Matthew Stanton, said: ‘This could spell disaster for the environment. It seems no lessons have been learned from HS2. The government is riding roughshod over environmental law. National planning policy requires a net gain for biodiversity, which demands vision from developers and those who approve planning applications. The Expressway is a 20th century solution to a 21st century challenge. We do not need more congested roads and air pollution – especially as we face the urgent task of reducing the nation’s carbon footprint. The Welsh Government understood this and rejected the proposed M4 relief road which would have destroyed the Gwent Levels.’

Carol Day, Solicitor at Leigh Day, the firm that represented BBOWT in the legal challenge, said: ‘The court’s judgement will be a disappointment to many who believe that proper assessment of the environmental impact of large infrastructure projects should be assessed from an appropriately early stage – at a point where alternative options are genuinely still on the table. It is unfortunate that decision-makers have ignored the concerns of specialist wildlife organisations and local people and pressed ahead without such strategic assessment, particularly for a scheme described as a project of a magnitude not undertaken in the UK for some 30 to 40 years. We will be carefully reviewing the judgement with our client, who is considering whether to appeal the decision.’