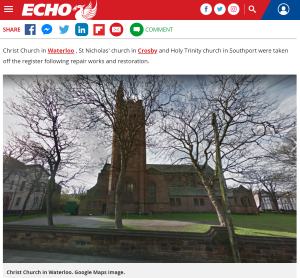 The removal of three buildings from Historic England’s ‘At risk’ register has been recognised on Sefton Council’s website, a report by The Liverpool Echo notes, as Christ Church in Waterloo, St Nicholas’ church in Crosby and Holy Trinity church in Southport were taken off the register following repair works and restoration, though a total of 58 across the region still are considered as being at risk.

Christ Church in Waterloo , St Nicholas’ church in Crosby and Holy Trinity church in Southport were taken off the register following repair works and restoration. Documents on Sefton Council ‘s website say: ‘We are continuing to work towards the removal of the 6 Conservation Areas [Old Hall; Christ Church; Lord Street; North Meols; Promenade; Waterloo Park] from the national register.’

‘Recent success includes the continued restoration of verandas on Lord Street, Southport, along with the improvements undertaken at previous derelict and vacant sites. Work has started on a number of Heritage at Risk sites following planning permission being granted, including: 2 Oxford Road, Birkdale, 8 Oxford Road, Birkdale and the former Sunnymede School at 4 Westcliffe Road, Birkdale. A number of planning applications have been approved which include the improvement of Heritage at Risk sites, including 30 Lulworth Road. An extra 4 care development scheme on a key Heritage at Risk site at 40 Lancaster Road (former school for the partially hearing) has been approved and, when implemented, will result in the complete transformation of a key asset which has lain derelict for many years.’

The local authority also says it is working tirelessly to regenerate Southport ; with millions of pounds being ploughed into the seaside town. The council also works closely with investors, and events such as The Southport Flower Show , The Food and Drink Festival; and says it is keen to build on Southport ‘s conference offering. Southport accounts for the majority of Sefton ‘s tourism – and in 2017 visitor numbers were up 4.2% from 2016 – to 9.1 million. The economical impact of this was £555m – an increase of 8% on the previous year. There was also a 4.6% increase on staying visitors.