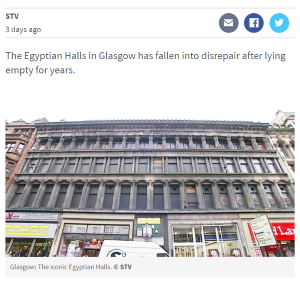 The owner of Glasgow’s Egyptian Halls, developer Derek Souter, has been ordered to make urgent repairs after it has fallen into disrepair following lying empty for years.

A property developer accused of neglecting one of Glasgow’s most famous buildings has been told to carry out urgent repairs or face enforcement action.

The Egyptian Halls, a 150-year-old A-listed building on Union Street, was designed by Alexander ‘Greek’ Thomson and is regarded as one of his finest creations.

… the four-storey structure has fallen into disrepair after lying empty for years.

Architects have previously warned of falling masonry from the building, which has been covered in scaffolding for around a decade, while some areas have been penetrated by water.

Developer Derek Souter now has until Wednesday to respond to concerns raised by Glasgow City Council about the state of the building.

Council bosses say if he doesn’t reply they will use any legislation available to make sure much-needed work is completed.

Mr Souter claims the local authority was meant to carry out repairs between 1996 and 2010 but failed to do so.

The developer is said to be contemplating legal action at the Court of Session….

A council spokesman said: ‘We set out a list of concerns about the deterioration of the building in August 2016.

‘Since then there has been no meaningful maintenance of the building. In the intervening period we have been monitoring the building and we commissioned an independent structural survey to give us a clear picture of the condition…’

Planning permission for a 114-bed hotel had been granted in 2012 but the project never got started….

Mr Souter previously blamed the council for the scheme’s failure to get off the ground, with the authority refuting his claims.