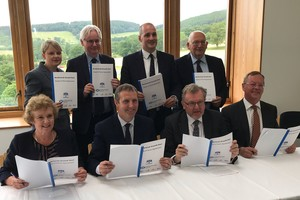 Up to £394.5 million is being invested into the 5 local authority areas on both sides of the border between England and Scotland, the ‘Borderlands’.

On 1 July 2019 Scottish Secretary David Mundell was joined by Minister for the Northern Powerhouse and Local Growth, Jake Berry, the Scottish Government’s Cabinet Secretary for Transport, Infrastructure and Connectivity, Michael Matheson and the leaders of the 5 councils to sign a momentous deal for the region. The deal will result in up to £394.5 million being invested into the 5 local authority areas on both sides of the border that make up the Borderlands. This financial boost will accelerate the region’s economic development, create jobs and encourage future investment in the area. Up to £265 million is coming from the UK Government, £85 million from the Scottish Government and the remainder coming from the other partners.

Some of the projects, which are all subject to approval of business cases, include:

The full Heads of Terms document sets out further details of the projects being proposed.

Scottish Secretary David Mundell said: ‘It’s fantastic news that the UK Government is to invest up to £265 million in the Borderlands deal. This is an ambitious approach to cross-border working between governments, local authorities and partners which will boost economic growth by helping existing business, encouraging new ventures and bringing a wealth of improvements to people who live and work in the area and to visitors. The Borderlands deal has made huge progress in the last 18 months. I’d like to thank the 5 ?local authorities who have worked so well together, along with the UK and Scottish governments, to achieve this.  The South of Scotland and northernmost parts of England operate as a single economic area and it is important the border is not allowed to become an obstacle to development.  To date the UK Government has committed more than £1.41 billion of Growth Deal investment to support sustainable growth in Scotland and create jobs and opportunities for the future.’

Minister for the Northern Powerhouse, Jake Berry MP, said: ‘This once-in-a-generation deal will deliver unprecedented investment in the Borderlands region while strengthening our cross-border links. We have moved closer to finalising a deal which will deliver over 5,500 jobs, dramatically improve transport and digital connectivity, boost tourism and generate around £1.1 billion of economic benefits for the region. With the combined strength of the UK, Scottish and local governments, let’s use this Borderlands Deal to realise a new era of regeneration, inclusive growth and limitless economic opportunities for the Borderlands and the whole of the Northern Powerhouse.’